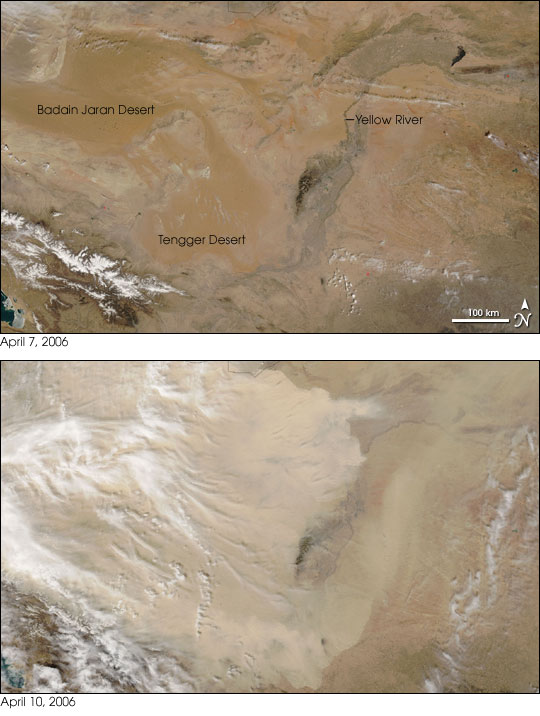 In early and mid-April 2006, waves of dust washed out of the Gobi Desert and spread across eastern China, the Korean Peninsula, and Japan. According to news reports, a dust storm that hit South Korea over the weekend of April 8 was the worst the country had seen in four years.

This pair of images shows a massive wave of dust that blew out of deserts in north-central China on April 10, 2006. The top image, captured by the Moderate Resolution Imaging Spectroradiometer (MODIS) on NASA’s Terra on April 7, 2006, shows the landscape of northcentral China, including two large, sandy deserts that are part of the Gobi Desert region. Just a few days later, an image from the MODIS sensor on the Aqua satellite shows that the area was completely hidden by a wave of bright dust that reached beyond the Yellow River.

Gobi dust is whipped eastward with prevailing winds by spring storms and can spread all the way to the United States. The storms can be hazardous to public health both in terms of air quality and visibility. In addition, the dust storms can devastate croplands and contaminate sensitive electronic equipment. Dust storms in China are on the rise, probably as a result of land degradation, such as deforestation and overgrazing, and drought. The Chinese government has undertaken a large reforestation effort to combat the spread of deserts and to mitigate the effects of dust storms, particularly around urban areas such as Beijing.

The large image above shows the dust storm on April 10 at MODIS’ maximum spatial resolution (level of detail) of 250 meters per pixel. The MODIS Rapid Response Team provides daily images of this area of China in a variety of formats and resolutions.