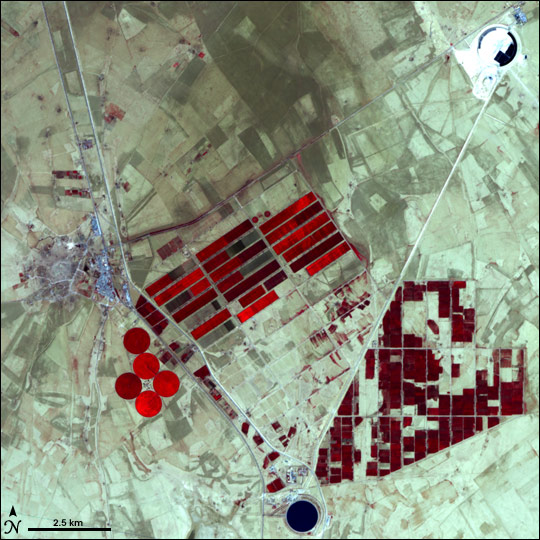 In the 1950s, oil exploration in Libya turned up another valuable resource: water. Huge aquifers, underground deposits of sand and rock that also contain water, lurked underneath the scorching sands. Libyans weighed the costs of bringing water up from the aquifers against transporting water from Europe and desalination of salt water, and chose the aquifers as the most cost-effective option.

The Advanced Spaceborne Thermal Emission and Reflection Radiometer (ASTER) on NASA ’s Terra satellite captured this image on April 10, 2006. It shows part of Libya’s massive water project, known as the Grand Omar Mukhtar, near the city of Suluq. Libyans plan to make the Grand Omar Mukhtar the country’s largest man-made reservoir. Water residing in reservoirs appears twice in this image, in the upper right and at the bottom. In both cases, the water appears dark blue. In this false-color image, vegetation appears red, and the brighter the red, the more robust the vegetation. In this arid place, the vegetation results from irrigated agriculture, so the areas of red appear in the crisp geometric shapes of carefully planned fields. The circular spots of red almost certainly result from center-pivot irrigation. Cityscape structures such as pavement and buildings appear in gray. Bare ground appears tan or beige.

Water hiding in aquifers can actually be cleaner than water resting in above-ground reservoirs because the process of percolating through soil and rock can remove impurities. Water can rest underground in aquifers for thousands or even millions of years. When geologic changes seal the aquifer off from further “recharging,” the water inside is sometimes called “fossil water.” Libya’s aquifer is one of these “fossils.” Radiocarbon dating has revealed that some Libya’s aquifer water has been there for 40,000 years, since before the end of the last ice age. Many populated areas, including cities in the United States, rely on aquifer water. Although some aquifers are still being recharged by natural processes, humans can easily drain aquifers faster than nature can renew them.