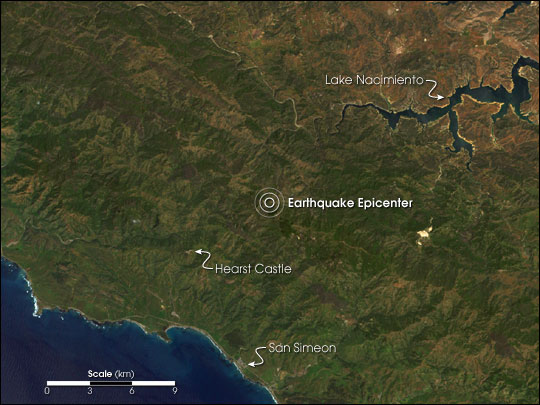 On the first day of winter, a magnitude 6.5 earthquake rumbled along the central California coast. In general terms, the tectonic activity of central California is caused by the northwestward slide of the plate of rock underlying the Pacific Ocean against the plate underlying North America. Most of the force of these two plates grinding past each other is borne at major strike-slip faults (where adjacent sides of the fault move horizontally), such as the San Andreas fault. But occasionally compression in the blocks of rock that make up the plates causes parts of the plate to get forced upward against the force of gravity, in a process called reverse faulting.

The preliminary report from the U.S. Geological Survey is that the December 22, 2003, quake centered 6 miles northwest of San Simeon was the result of reverse faulting in the Oceanic fault zone in the Santa Lucia Mountains. This region has experienced numerous small and moderate earthquakes in the time geologists have been monitoring the region, with the most severe being a magnitude 6.2 earthquake of November 1952.

The earthquake region is pictured here in this Landsat satellite image from April 19, 2002. According to news reports, numerous aftershocks greater than magnitude 4.0 were still rattling the region on Tuesday, December 23. Media reports are that at least two people were killed by the collapse of buildings in the historic town of Paso Robles. Dozens more people were injured, while roads, power grids, and other infrastructure suffered damage as well. The nearby historic Heart Castle with its large art collection suffered little damage. According to the Los Angeles Times, this was the state’s largest earthquake since 1999.

Image by Robert Simmon, based on Landsat data provided by the Global Land Cover Facility, University of Maryland.