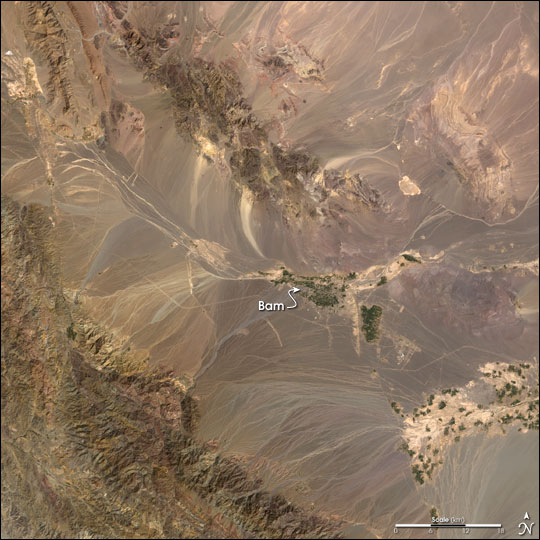 A powerful earthquake struck southeastern Iran on December 26, 2003, killing thousands and destroying much of the city of Bam. The USGS National Earthquake information center is reporting a magnitude of 6.5 for the quake, which was located just southwest of the city. About 60 percent of the buildings in Bam were destroyed. The old quarter and a 2,000-year-old citadel (severely damaged by the earthquake) were built primarily of mud brick.

Iran is a mountainous country subject to frequent severe earthquakes. A subduction zone where the Arabian Plate is sliding underneath the Eurasian Plate lies inland from, and parallel to, the Persian Gulf coast. This collision is squeezing the edge of the Eurasian plate, resulting in common earthquakes and a series of mountain ranges. Bam is northeast of one of these mountain ranges, the Jebal Barez. Frequent earthquakes occur along the Nayband and Gowk faults, near Bam, but the immediate area experiences relatively few earthquakes.

This image was created from Landsat 7 Enhanced Thematic Mapper Plus (ETM+) data acquired on October 1, 1999.

Image by Robert Simmon, based on data provided by the Global Land Cover Facility, University of Maryland. 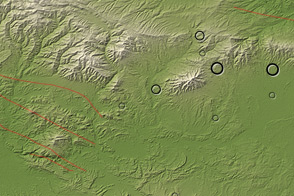