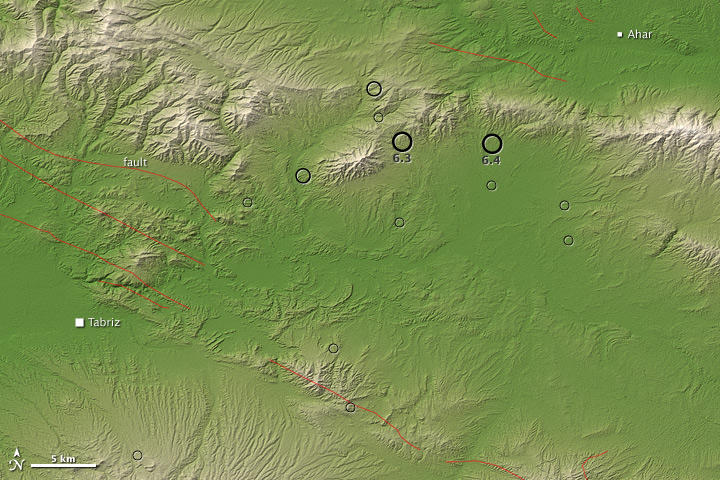 Earthquakes with magnitudes 6.4 and 6.3 struck northwestern Iran on August 11, 2012. The earthquakes occurred midway between Lake Orumiyeh and the Caspian Sea. Separated by only 11 minutes and 10 kilometers (6 miles), both quakes were shallow, occurring less than 10 kilometers below ground. The quakes leveled mud-brick and concrete homes in about 230 villages, Al Jazeera reported. By August 13, the death toll had surpassed 300. More than 3,000 people had been injured, and more than 16,000 people were left homeless by the disaster.

This map shows the region where the earthquakes struck, with rings marking the locations of earthquakes and aftershocks through August 13. (Bigger, thicker rings indicate higher magnitudes.) The red lines indicate faults. The earthquake locations and faults are superimposed on a digital elevation map, made from the ASTER Global Digital Elevation Model Version 2 (GDEM2). Lighter colors correspond with higher elevations.

The U.S. Geological Society (USGS) explained that the earthquakes occurred in the crust of the Eurasian Plate. In this region, the Arabian Plate moves roughly northward with respect to the Eurasian Plate, at about 26 millimeters (1 inch) per year, but the USGS stated that these earthquakes occurred about 300 kilometers (200 miles) east of the plate boundary. The event likely occurred as a result of an oblique strike-slip fault, where blocks of the Earth slide past each other. But because the location was so far from a plate boundary, “precise identification of the causative fault(s) is difficult at this time.”