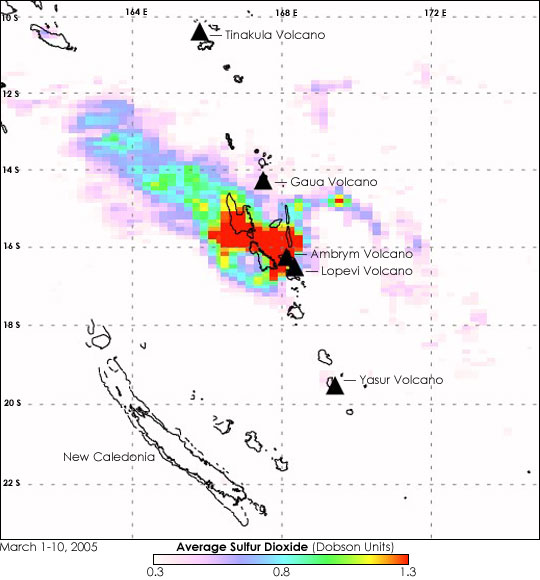 Sandwiched between Fiji and Australia in the South Pacific, the island nation of Vanuatu hosted the strongest point source of sulfur dioxide on the planet for the first months of 2005. Ambrym Volcano, on the island of the same name, has been steadily emitting sulfur dioxide for at least six months, and this image, produced using data collected by the Ozone Monitoring Instrument on NASA’s Aura satellite during the first ten days of March 2005, shows high concentrations of sulfur dioxide drifting northwest from the volcano.

Ambrym Volcano is not erupting in the traditional sense with thick ash plumes and explosive bursts of lava, rather it is leaking sulfur dioxide gas from active lava lakes in what scientists call “passive” or “non-eruptive” emissions. Despite these gentle names, the leaking volcano still poses a tremendous hazard to the local population. The gas has a strong smell and can irritate the eyes and nose and make breathing difficult. Higher in the atmosphere, sulfur dioxide combines with water to create rain laced with sulfuric acid. On Ambrym, acid rain has destroyed staple crops and contaminated the water supply, leaving the communities in need of food aid.

Satellites have only been able to monitor sulfur dioxide emissions from large eruptions or the most powerful passive degassing in the past. All other sulfur dioxide emissions remain at low altitudes and have low concentrations, making them hard to see from space. On July 15, 2004, NASA launched its Aura satellite carrying the Ozone Monitoring Instrument (OMI). With greater spatial resolution (the ability to “zoom-in” to see greater detail) and higher sensitivity to sulfur dioxide than any previous space-borne sensor, OMI is allowing scientists to study passive volcanic degassing on a daily basis for the first time. The above image is an example of the instrument’s preliminary, uncalibrated, and unvalidated data.

This new view of passive volcanic emissions could lead to significant advances in understanding both volcanic eruptions and the impact of sulfur dioxide on climate. Passive emissions can be a precursor to explosive eruptions, and thus provide a warning signal that the volcano’s activity may be changing. Once in the atmosphere, sulfur dioxide creates a bright haze that reflects sunlight back into space. Since less sunlight reaches the Earth, the sulfur dioxide haze has a cooling effect on the climate. (See “Every Cloud Has a Filthy Lining”) Scientists building computer models of the complicated interactions that make up Earth’s climate need to understand how much sulfur dioxide enters the atmosphere and where it travels. Since most volcanic sulfur dioxide emissions come from passive degassing, OMI will allow scientists to assess the volcanic contribution to atmospheric sulfur dioxide concentrations with unprecedented accuracy. The data should help refine climate models.

NASA image and caption information courtesy Simon Carn, Joint Center for Earth Systems Technology (JCET), University of Maryland Baltimore County (UMBC). The OMI was added to the Aura satellite as part of a collaboration between the Netherlands' Agency for Aerospace Programs, the Finnish Meteorological Institute, and NASA.