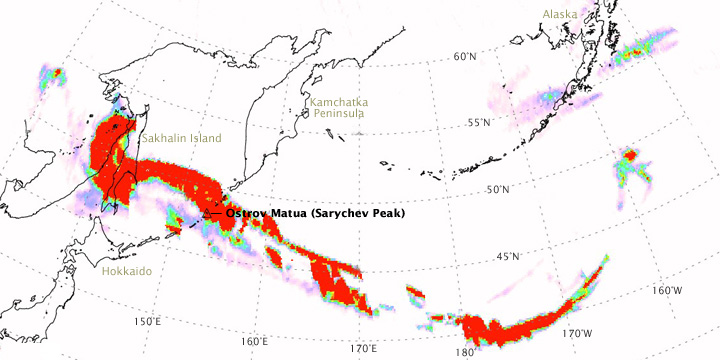 Atmospheric scientists are interested in tracking sulfur dioxide because it can endanger public health and because it can affect global climate. In mid-June 2009, Sarychev Peak Volcano on Matua Island in the northwest Pacific began a series of eruptions of large amounts of ash. According to atmospheric scientist Simon Carn, who is part of the science team for the Ozone Monitoring Instrument (OMI) on NASA’s Aura satellite, it was also almost certainly the largest sulfur dioxide event so far this year.

When sulfur dioxide reacts with water vapor, it creates sulfate ions (the precursors to sulfuric acid), which are very reflective. Powerful volcanic eruptions can inject sulfate aerosols into the stratosphere, beyond the reach of cleansing rainfall. At these altitudes, the sulfates can linger for months or years, cooling the climate by reflecting incoming sunlight. (The effect is stronger when the eruptions occur at tropical latitudes.) Carn says the persistence of such high concentrations of sulfur dioxide in the OMI data throughout the week indicates that the plume from Sarychev Peak reached high altitudes. Data from other satellites (such as CALIPSO) suggest that the volcanic plume reached altitudes of 10–15 kilometers, and perhaps as high as 21 kilometers.

Sulfur dioxide is a powerful irritant to the respiratory tract, eyes, and skin, and it leads to acid rain. The primary source of atmospheric sulfur dioxide is burning coal and other fossil fuels, and it is one of the pollutants regulated by the Clean Air Act. Since 1980, the concentration of sulfur dioxide in the United States has declined by about 70 percent, according to the Environmental Protection Agency.