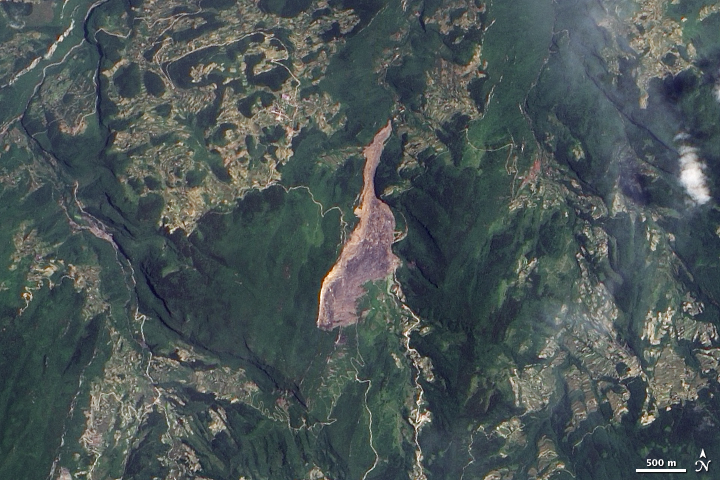 On June 5, 2009, a mountainside collapsed in the Chongqing region of southern China. The landslide dropped some 12 million cubic meters (420 million cubic feet) onto several homes and an iron ore mine, trapping dozens of people. According to a June 18 report from Xinhua News Agency, 64 people remained missing.

The Advanced Land Imager (ALI) onboard NASA’s Earth Observing-1 (EO-1) satellite captured this photo-like image of the landslide on June 17, 2009. Mountain ridges run generally north-south through this area, and the June 5 landslide occurs on the eastern slope of the middle ridge shown in the image. A giant brown scar of bare land on an otherwise vegetated landscape, the landslide fans out toward the southeast. The mountainside collapse appears to affect two roads—one road running along the top of the ridge, which borders the landslide, and another road to the east, which the landslide has partially buried.

Besides covering an iron ore operation and six houses in the Tiekuang township, the landslide cut power and communication for the region. In the days immediately following the event, heavy rains forced authorities to temporarily halt search-and-rescue efforts.

The cause of the landslide was unclear. The BBC reported that an official at the Chongqing work safety bureau said that the landslide did not appear to result from work at the mine.