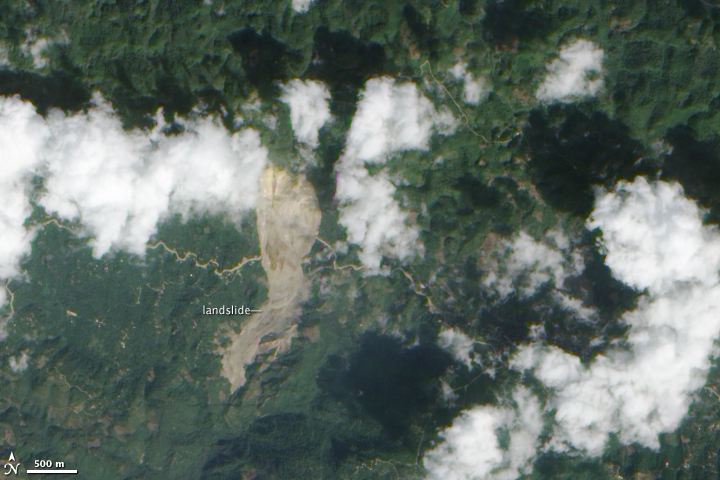 The Advanced Land Imager (ALI) on NASA ’s Earth Observing-1 (EO-1) satellite captured this true-color image of the area on January 9, 2009, five days after the landslide. In this image, the landslide forms a wide, beige-colored gash on the lush green landscape. The source of the landslide is toward the north, and near the source, the landslide is roughly half a kilometer (one-third of a mile) wide. The debris field narrows farther downhill. The landslide crosses the road, which appears as a meandering, east-west beige line. Clouds float overhead, casting their shadows on the land surface below, but they do not impede the satellite’s view of the disaster.

As of January 5, the landslide had killed more than 30 people, and left dozens more missing, according to news reports. On January 6, authorities suspended rescue efforts, citing unstable terrain and continued rock falls that posed a risk to rescuers. An earlier rock fall the previous month had killed at least two people, prompting officials to close the local road. Roughly 140 people, however, were believed to have ignored the closure warnings, left their vehicles, and walked past the road barricades on foot on the day of the January 5 landslide.