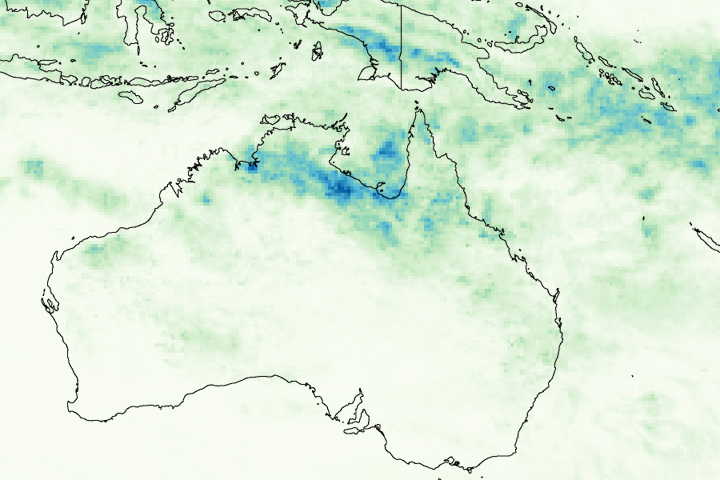 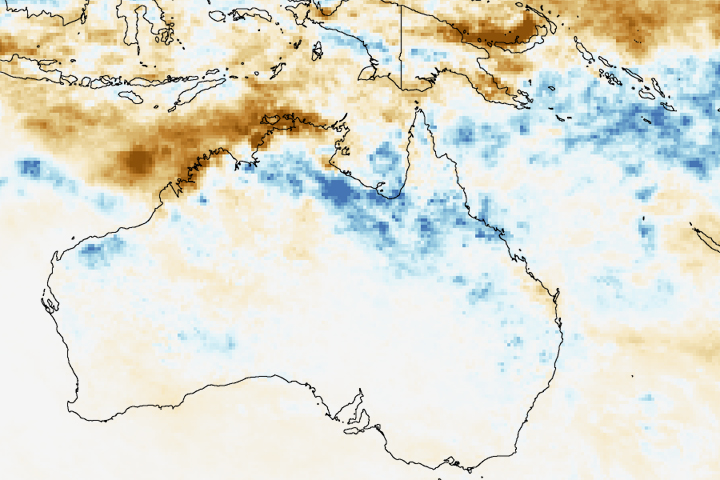 Over the past two weeks, torrential rains have brought both drought relief and severe flooding to parts of Queensland and Northern Territory in northern Australia. The wet weather was due primarily to the start of the wet phase of the monsoon, but may have been intensified by a La Niña episode that has been going on since February 2007.

This pair of images of the event is made from the results of the near-real-time, Multi-satellite Precipitation Analysis (TMPA) at NASA Goddard Space Flight Center. The analysis is based on data collected by the Tropical Rainfall Measuring Mission satellite (TRMM) between December 24, 2008, and January 7, 2009. The top image shows total rainfall accumulation in shades from yellow (light rain) to blue (heavy rain). The bottom image shows the rainfall anomaly—how unusual this event was compared to average rainfall for this time of year. Places where rainfall was unusually high are blue, while unusually low rainfall is shown in brown.

The most prominent feature in the top image is a northwest-southeast band of very heavy rain that lies just inland from the coast across central northern Australia. The band extends from the western edge of Northern Territory in the west to the base of the Cape York Peninsula in the east. Rainfall totals in many places exceed 300 millimeters (about 12 inches). Pockets of even higher amounts (400 millimeters, or about 16 inches) are embedded in the band.

The bottom image shows rainfall anomalies for this two-week period compared to the five-year average (2002-2007). Above-average rainfall extended over northern and eastern Australia northward towards the islands in the Western Pacific. This pattern is consistent with the broad-scale rainfall “signature” of La Niña. The anomaly was significant across north-central Australia and the Gulf of Carpentaria, with rainfall at least 15 millimeters per day higher than normal. For more information on this event, see the related story on the TRMM webpage.

TRMM includes the first precipitation radar in space, and the mission is a partnership between NASA and the Japanese Space Agency, JAXA.