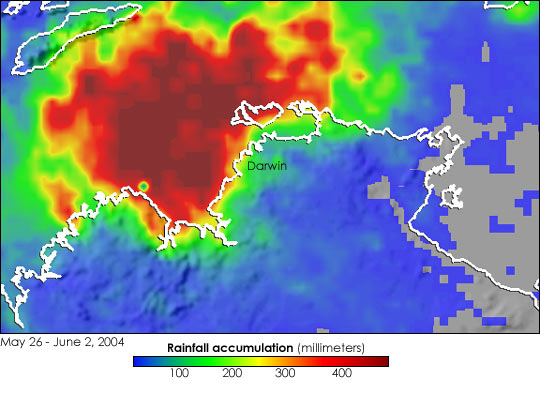 Northern Australia has a marked wet and dry season. During the wet season, which typically lasts from November to April, rainfall can be quite plentiful, especially during the southern hemisphere summer with monthly totals on the order of 300 to 400 millimeters. However, in winter months during the middle of the dry season, there is almost no rainfall with places like Darwin averaging less than 1 mm per month during June and July. So when Darwin received 48 mm of rain the first two days of June, it was enough to break the rainfall record for the month. A persistent trough over the Timor Sea was responsible for the record-breaking rainfall.

The Tropical Rainfall Measuring Mission satellite was launched in November of 1997 and uses both passive and active sensors to measure rainfall over the global tropics from space. The TRMM-based, near-real time Multi-satellite Precipitation Analysis (MPA) at the NASA Goddard Space Flight Center provides quantitative rainfall estimates over the global tropics. MPA rainfall totals are shown for May 26 to June 2, 2004, over the coastal region of northern Australia. It shows that while the MPA estimates around Darwin are on the order of 2 to 4 inches, just off the coast and covering much of the Timor Sea, darker red areas indicate much larger accumulations on the order of 16 to 20 inches.