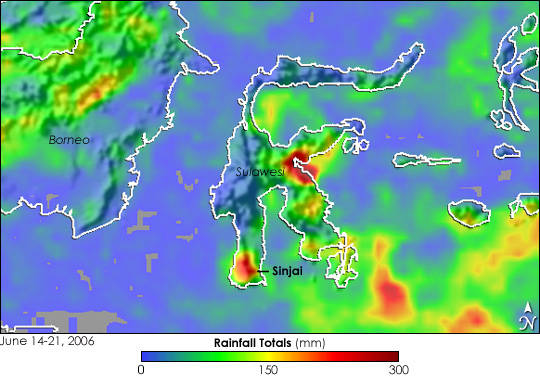 Days of heavy rains led to devastating landslides on the central Indonesian island of Sulawesi (formerly Celebes) in mid-June 2006. As of June 22, the death toll stood at 200 with 135 still missing, reported the United Nations Office for the Coordination of Humanitarian Affairs. The hardest hit area was Sinjai in South Sulawesi.

This image reflects the rainfall totals over the island from June 14 to June 21, 2006. Highest rainfall totals, on the order of 10 to 12 inches (300 millimeters) are red. The southernmost area of heavy rain is near the southern tip of Sulawesi and covers the higher terrain adjacent to Sinjai. Deforestation in the region is believed to be a contributing factor in the disastrous mudslides.

The image was created using data from the Multi-satellite Precipitation Analysis (MPA), which monitors rainfall over the global Tropics. The MPA uses rainfall measurements from the Tropical Rainfall Measuring Mission satellite (TRMM) to calibrate rainfall estimates from other satellites.