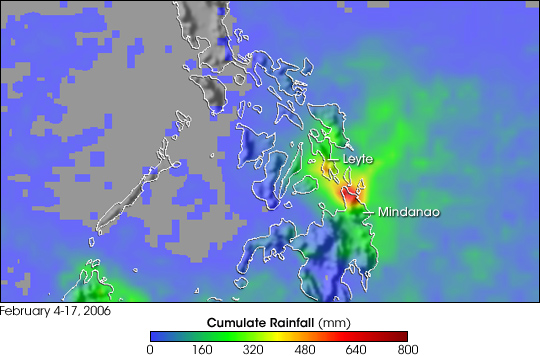 Heavy rains in February 2006 triggered a large mudslide in southern Leyte in the central Philippines, burying the entire village of Guinsaugon. As of February 17, 2006, there were 23 confirmed fatalities, but hundreds more were feared dead as 1,500 people were reported missing. This image shows rainfall data from the area collected by the Tropical Rainfall Measuring Mission (TRMM) satellite.

The TRMM-based, near-real time Multi-satellite Precipitation Analysis (MPA) at NASA Goddard Space Flight Center monitors rainfall over the global tropics. The image above shows MPA rainfall totals for February 4-17, 2006, for the Philippine Islands. The highest amounts recorded by the MPA for this period are about 30 inches (darkest red area) and are located over the northern tip of Mindanao. However, rainfall totals over southern Leyte do approach 500 millimeters (20 inches; small orange area north of the larger red area), with totals of 250 millimeters (green areas) over the surrounding area. The northern tip of Mindanao is separated from southern Leyte by the narrow Surigao Strait.

The excessive rains may be linked to the ongoing La Niña. In December, cooler ocean waters began to emerge in the central equatorial Pacific signaling the onset of a La Niña. La Niña is associated with above-normal sea surface temperatures in the Western Pacific and stronger trade winds. This pattern can significantly enhance rainfall across the Western Pacific region.

The TRMM satellite was launched into service in November 1997. It measures rainfall over the global Tropics using both passive and active sensors, including the first and only precipitation radar in space. TRMM is a joint mission between NASA and the Japanese space agency, JAXA.

In mid-February, heavy rains triggered floods in Mindanao Island in the southern Philippines.