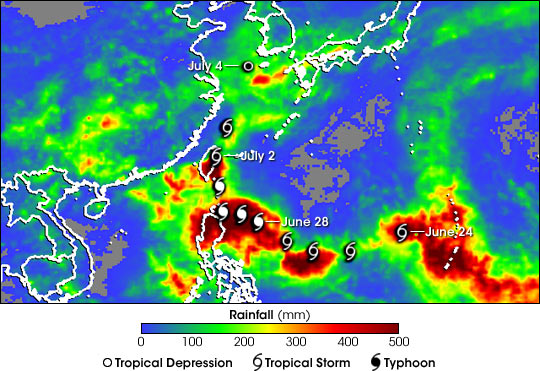 Once a powerful super typhoon packing winds of 125 knots (232 kph) as it approached the northern Philippines back on the June 29, 2004, Mindulle left behind a path of destruction across the West Pacific, most notably across the northern Philippines and Taiwan. The bulk of the damage was not due to Mindulle’s strong winds, however, but to the heavy rains the storm generated that resulted in widespread flooding and mudslides. The storm was responsible for at least 31 fatalities in the Philippines and 11 more are still missing. There were at least 26 fatalities in Taiwan with 13 others still missing on that island. Almost all of these fatalities were a direct result of flooding and mudslides.

The Tropical Rainfall Measuring Mission (TRMM) satellite has been monitoring rainfall over the global tropics since its launch in November 1997 using both a microwave imager and the first precipitation radar in space. The TRMM-based, near-real-time Multi-satellite Precipitation Analysis (MPA) at the NASA Goddard Space Flight Center provides quantitative rainfall estimates over the global tropics. MPA rainfall totals for the period June 23 - July 4, 2004, are shown for the West Pacific and surrounding areas. Mindulle’s track is denoted by the cyclone symbols shown at the 00:00 UTC positions beginning at 00:00 UTC June 24, 2004. Mindulle’s path is clearly identified by the trail of heavy rain (dark red areas) across the Philippine Sea. The storm’s slow forward speed as evidenced by the closely positioned cyclone symbols was responsible for the near 500-mm rainfall totals (dark reds) that stretch across the far the western part of the Philippine Sea and over the northern part of the island of Luzon. 500-mm rainfall accumulations are also visible over central and southern parts of Taiwan. Significantly smaller amounts of rainfall occur along the northern part of Mindulle’s path as the storm accelerated as it moved north of Taiwan and began moving much faster.

TRMM is a joint mission between NASA and the Japanese space agency JAXA. The U.S. Navy’s Joint Typhoon Warning Center use TRMM data operationally in forecasting the intensities and pathways of severe storms in the Pacific.