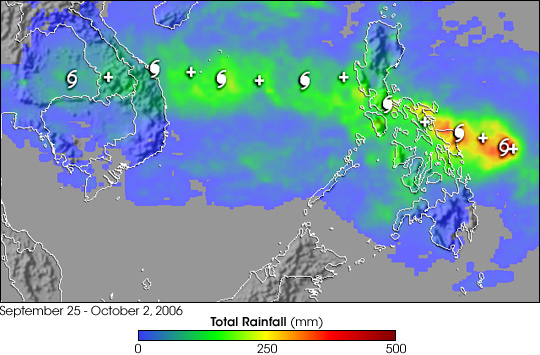 After forming just east of the central Philippines, Tropical Storm Xangsane (“elephant” in Lao) intensified into a typhoon and battered the central Philippines with high winds and heavy rains on September 27 and 28, 2006. At least 110 people were reported killed, with many still missing as a result of flooding and mudslides brought on by the storm as of early October. After passing through the Philippines and out into the South China Sea, Xangsane headed for the central coast of Vietnam, where it made landfall on October 1. The storm caused widespread damage and flooding in Vietnam, and at least 59 people were reported to have died there as a result.

This image shows rainfall totals estimated in part from data collected by the Tropical Rainfall Measuring Mission satellite (TRMM). TRMM data are part of the near-real-time Multi-satellite Precipitation Analysis (MPA) at NASA Goddard Space Flight Center, which monitors rainfall over the global Tropics. MPA rainfall totals for Southeast Asia for September 25-October 2, 2006, are shown in the image. Storm symbols mark Xangsane’s path. Rainfall totals of over a foot are shown over Samar in the east-central Philippines (red areas). A broad area of 4- to 8-inch totals (green) stretches from the central Philippines to the coast of Vietnam.

TRMM was placed into service in November of 1997. From its low-earth orbit, TRMM has been measuring rainfall over the global Tropics using a combination of passive microwave and active radar sensors. TRMM is a joint mission between NASA and the Japanese space agency, JAXA.

Typhoon Xangsane began as an area of low air pressure (tropical depression) on September 25, 2006, in the western Pacific near the coast of the Philippine Islands. Over the next 36 hours, it grew into a typhoon.