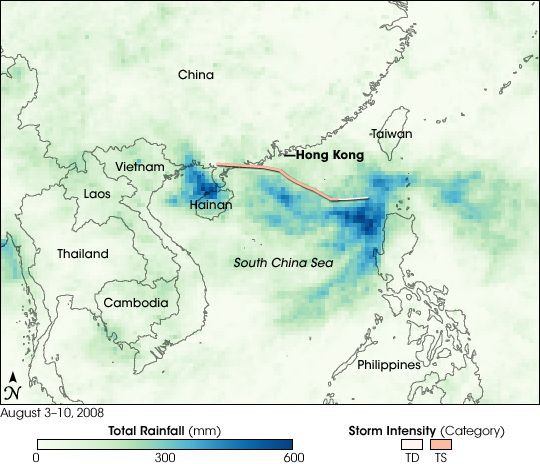 Tropical Storm Kammuri was short lived and did not reach cyclone (hurricane) strength, but the storm did drench southern Guangdong Province, home to Hong Kong, with heavy rains. In Hong Kong, rains snarled traffic and forced the stock market to close for a day. This visualization shows the path of the storm (pink and white lines) as well as rainfall accumulations (light green to blue) measured by the Tropical Rainfall Measuring Mission (TRMM) satellite between August 3 and August 10, 2008.

The heaviest rains occurred off the northwest coast of the Philippines, where the storm first formed in the South China Sea, and then between the island of Hainan and Vietnam. Although TRMM did not detect large areas of heavy rains of Vietnam, the country did experience deadly flash flooding. A very small patch of rainfall accumulations of about 300 millimeters (11.8 inches) in northern Vietnam corresponds to the one of the areas that experienced severe flash flooding.

TRMM provides rainfall observations across the global tropics using the first precipitation radar flown in space. The spacecraft is a joint mission between NASA and JAXA, the Japanese Space Agency.