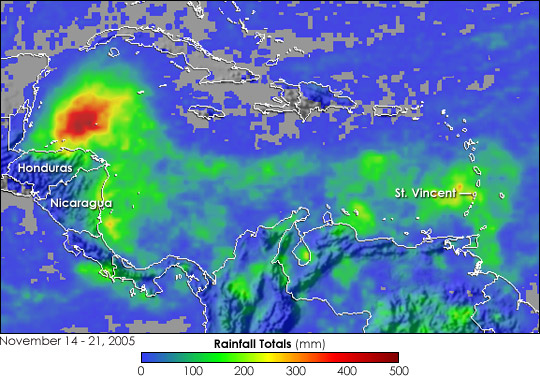 Tropical Storm Gamma unleashed heavy rain on Honduras on November 21, 2005, causing flooding and landslides on the country’s northern coast. More than 11,600 evacuated and at least 32 died, but with many areas still isolated, the exact toll was still unknown on November 22. Gamma was the twenty-fourth storm of the 2005 Atlantic Hurricane season, the busiest season on record. The storm formed on November 14 and quickly intensified to just below tropical-storm strength. On November 15, the storm dumped rain over the island of St. Vincent, where 2 died in a mudslide. As the storm tracked west across the Caribbean, it nearly dissipated, but it reformed into Tropical Storm Gamma before striking Honduras with winds of 72 kilometers per hour (45 miles per hour).

Though Gamma was never well formed enough to track with photo-like visible imagery, its progress across the Caribbean is abundantly clear in this rainfall accumulation image. The image, collected by the Tropical Rainfall Measuring Mission (

The rainfall totals shown here were taken from the TRMM-based, near-real time Multi-satellite Precipitation Analysis (MPA) at NASA’s Goddard Space Flight Center. MPA provides rainfall estimates over the global Tropics. The image is an example of the value of the TRMM satellite, which was launched in November 1997 to provide better estimates of rainfall over the global Tropics. Since that time, TRMM has been providing unprecedented estimates of rainfall over the Tropics using its array of passive and active sensors.