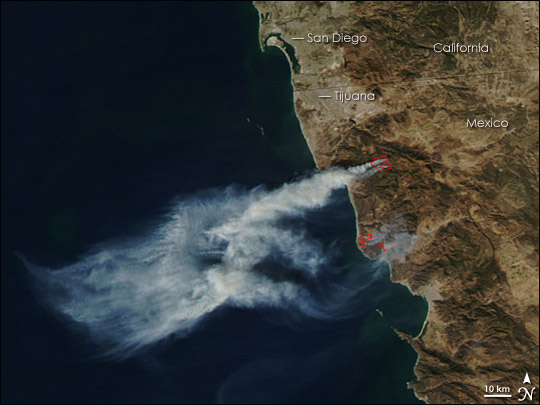 Fire is a natural part of the ecosystem in the shrub lands of northern Baja California, particularly in the fall, when hot, dry Santa Ana winds blow from the east. The winds sweep dry air from the Sonora Desert of northern Mexico, Arizona, and New Mexico out over the Pacific Ocean. The winds dry out plants, making them more prone to wildfire. Once a fire starts, the fast-blowing winds can easily fan the flames into an uncontrollable wildfire. In Baja California, such fires are often allowed to burn themselves out. To the north, in the United States, state and federal land management agencies control fires near populated areas more aggressively, stamping out the fires as quickly as possible. However, such tight control may eventually result in larger fires because dead wood, weeds, other fuels accumulate between infrequent burnings.

The Santa Ana winds were blowing strongly on November 19, 2005, when the Moderate Resolution Imaging Spectroradiometer (MODIS) on NASA’s Aqua satellite acquired this image. The National Weather Service issued a red flag warning for Southern California, warning of warm, windy weather that would allow small fires to explode out of control quickly. On November 18, Santa Ana winds gusting past 50 miles per hour drove a rapid-growing fire in the mountains around Ventura, California. It is likely that similar conditions fueled the fires just south of the border as well.

The large image provided above is at MODIS’ maximum resolution of 250 meters per pixel. The image is available in additional resolutions from the MODIS Rapid Response Team. The team also provides daily images of the region.