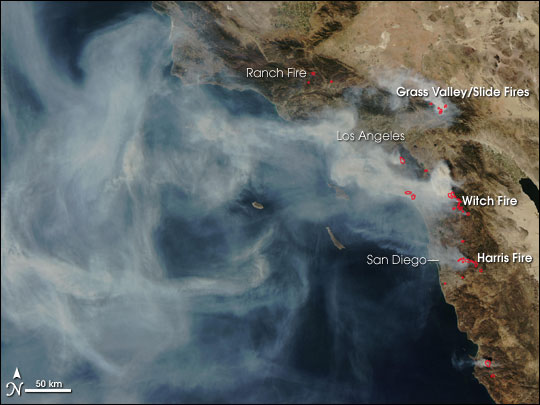 The fierce Santa Ana winds driving Southern California’s wildfires in late October died down on the evening of October 24, according to news reports. This image of the area was captured by the Moderate Resolution Imaging Spectroradiometer (MODIS) on NASA’s Aqua satellite at 1:45 p.m. Pacific Daylight Time on October 24, 2007. Places where MODIS detected active fires are outlined red. Clouds of smoke still spread across the Pacific Ocean, but the smoke also appears to be pooling directly above several of the fires, which suggests that winds had begun to abate at the time of this image.

The large image provided above is at MODIS’ maximum spatial resolution (level of detail) of 250 meters per pixel. The MODIS Rapid Response Team provides twice-daily images of the region in additional resolutions.