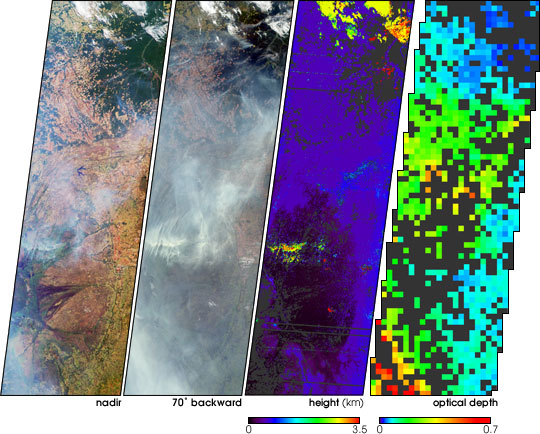 Numerous fires occurred near the headwaters of the Xingu River and the Xingu Indigenous Peoples’ Reserve in Mato Grosso, Brazil, during late June and early July 2004. These images from the Multi-angle Imaging SpectroRadiometer (MISR) show smoke abundance and the heights attained by smoke plumes on June 29, 2004. The four image panels each show an area that extends from the Xingu headwaters region (upper right of each panel), to the great alluvial fan of the Taquari River in Mato Grosso do Sul (lower left). In addition to the four-image panel, an animation comparing the Xingu headwaters region on May 26, 2000, and May 21, 2004, illustrates land surface changes that have occurred over the past four years. As people build new roads and clear more forest, the opportunity for fires to occur in new areas of the Amazon forests tends to increase.

The natural-color images (first and second panels from left) demonstrate the advantages of having multiple cameras on a sensor to observe the same area at different angles. The first image shows the view from MISR’s nadir-viewing camera (pointing straight down from the sensor); the second is from the 70-degree-backward-viewing camera. Throughout the scene, and especially in the lower left corner, a pall of smoke not clearly visible in the nadir view is readily apparent at the 70-degree view.

The third panel in the series is a stereoscopic height field, which scientists create by comparing the views from MISR’s multiple cameras and measuring how much a smoke or cloud feature appears to shift from view to view while the surface below remains still. The more the feature appears to shift when the sensor views it from different angles, the higher in the atmosphere the smoke or cloud is. Several noticeably thick wisps of smoke (below and to the left of image center) echo the shapes of the northeast-southwest trending mountain ranges of the Planalto do Mato Grosso. The stereo height field indicates that the smoke rose about 3.5 kilometers above the surface, and cumulus clouds were about one kilometer higher. Dark gray areas show where the automated computer program that processes the data did not have enough information to calculate the height.

The Multi-angle Imaging SpectroRadiometer observes the daylit Earth continuously and every 9 days views the entire globe between 82 degrees north and 82 degrees south latitude. The MISR Browse Image Viewer provides access to low-resolution true-color versions of these images. The non-animated data products were generated from a portion of the imagery acquired during Terra orbits 24104, and the animation was derived from orbits 2333 and 23536. The still panels cover an area of about 380 kilometers x 1264 kilometers, and utilize data from blocks 99 to 106 within World Reference System-2 path 226.