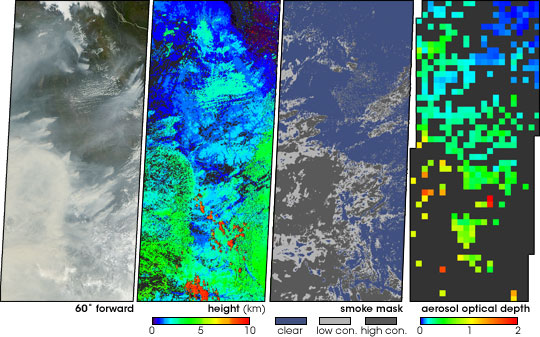 Large, lightning-induced fires were active in Alaska and the Yukon Territory from mid-June to mid-July 2004. Thick smoke particles filled the air during these fires, prompting Alaskan officials to issue air quality warnings. Some of the smoke from these fires spread as far as New Hampshire. The Multi-angle Imaging SpectroRadiometer (MISR) on NASA’s Terra spacecraft captured these observations on June 30, 2004. Scientists from NASA’s Jet Propulsion Laboratory have used MISR’s observations to distinguish clouds from smoke and to estimate heights and optical depths (thickness) for the smoke—information that will improve models of how the atmosphere transports smoke aerosols.

The images cover an area extending from Mackenzie Bay in northwest Canada, through the Alaskan Interior and along the Alaska-Yukon border, south to the Wrangell Mountains. The first panel (left) in the series is a natural-color image from MISR’s 60-degree-forward-viewing camera. Prominent smoke plumes are visible along the right-hand edge, southwest of the Peel River in the Yukon Territory, and along the left-hand edge in the vicinity of the Yukon River and the town of Eagle at the Alaska-Canada border. In the lower portion of the image, thick smoke obscures the Wrangell Mountains.

The second panel in the series shows the height above the Earth’s surface of everything in the scene—including smoke, clouds, and topographic features. Most of the smoke and many low clouds are situated at heights between about 1 and 4 kilometers above the surface, while a few high clouds attained much greater altitudes (red areas at bottom).

The final panel shows the concentration, or thickness, of aerosol particles in the atmosphere. Increasing amounts of smoke aerosol appear as green, yellow, orange and red pixels, and clearer skies are indicated by blue pixels. Dark gray areas show where the calculation of aerosol thickness wasn’t possible, either because the smoke was simply too thick or the presence of clouds interfered with the calculation.


MISR has nine cameras, each viewing the same spot on Earth from a different angle. Comparing how much a feature appears to shift compared to the surface from one camera’s view to another produces allows the height of the feature to be measured. High clouds appear to shift more from view to view than lower features such as low clouds, smoke plumes, and mountainous terrain. A map of heights measured using this method is called a stereoscopic height field.

The smoke mask is based on the results of a "machine-learning" classifier that detects smoke by examining the spectral, textural, and angular features in the radiances from three oblique-viewing MISR cameras (oblique means at an angle, rather than straight down). Machine-learning programs improve themselves based on experience they gain through processing data. With training, the classifier will eventually be able to identify plume-like shapes, making it possible for the classifier to automatically isolate plume heights from the stereo product.

MISR’s aerosol optical depth retrieval uses changes in surface brightness and contrast at different view angles to measure the amount of aerosols in a column of atmosphere. Because the calculation depends on observations of the surface, optical depth cannot be calculated if the smoke or clouds are so thick that MISR can’t observe the surface.

The Multi-angle Imaging SpectroRadiometer observes the daylit Earth continuously and every 9 days views the entire globe between 82 degrees north and 82 degrees south latitude. These data products were generated from a portion of the imagery acquired during Terra orbit 24123. The images cover an area of about 400 kilometers by 898 kilometers and use data from blocks 35 to 41 within World Reference System-2 path 64.

MISR was built and is managed by NASA’s Jet Propulsion Laboratory, Pasadena, Calif., for NASA’s Office of Earth Science, Washington, DC. The Terra satellite is managed by NASA’s Goddard Space Flight Center, Greenbelt, Md. JPL is a division of the California Institute of Technology.