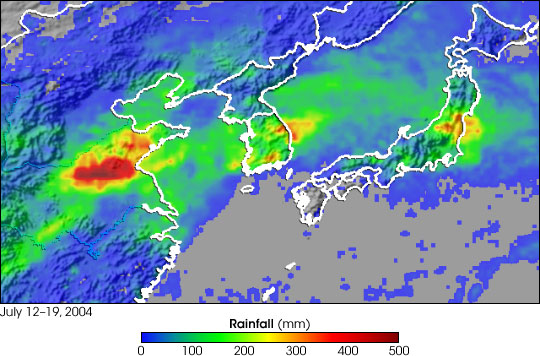 The summer rainy season brought on by the summer monsoon has arrived over eastern Asia bringing with it seasonal flooding and torrential rains. Over the past few weeks, parts of Nepal, India and Bangladesh have been devastated by floods, but areas farther north have received their share of heavy rain too. China, Korea, and Japan have all suffered casualties recently as a result of flooding brought on by torrential rains. Over the past week, at least 17 people were lost due to flooding and mudslides in Japan. The situation is even worse in China as the death tolls have climbed into the hundreds so far this year. Hardest hit are southern, central and, more recently, eastern China particularly along the Huai River, which is at its highest level in over a decade.

In November of 1997, the Tropical Rainfall Measuring Mission (TRMM) satellite was launched in an effort to provide better estimates of rainfall over the global Tropics. Since that time, TRMM has been providing unprecedented estimates of rainfall over the Tropics using its array of passive and active sensors. TRMM can cover vast areas of the Tropics where rainfall is poorly measured such as over oceans and land areas where radar coverage is poor or lacking. The TRMM-based, near-real time Multi-satellite Precipitation Analysis (MPA) at the NASA Goddard Space Flight Center provides rainfall estimates over the global Tropics.

MPA rainfall totals for July 12 through July 19, 2004, are shown for East Asia. A swath of 4 to 8 inch rainfall (green area) extends from central China across the Yellow Sea, South Korea, and the Sea of Japan and into central Japan. The highest totals are over eastern China in the Shandong, Henan, Anhui, and Jiangsu provinces where between 12 and 20 inches (red area) of rain fell. Localized areas of over a foot of rain appear along parts of the southern and eastern coast of South Korea and over central Japan along the east coast of Honshu.

Monsoon rain continues to drench eastern China bringing with it the floods that annually plague the country.