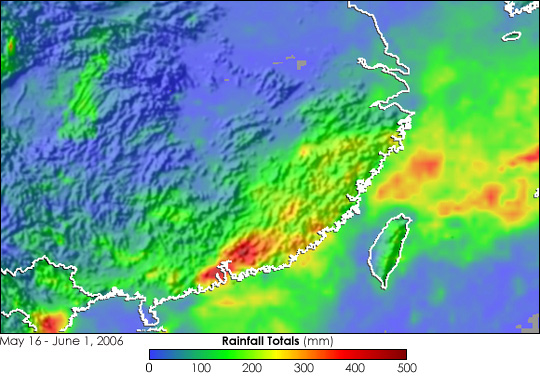 Southeastern China was hit hard in May and early June 2006, when heavy rains and flooding killed dozens of people. The problems began when Typhoon Chanchu made landfall along the central southeastern coastline on May 18, 2006. The storm, which had earlier passed through the central Philippines, dumped several inches of rain and battered southern coastal regions leaving 11 people dead. Later in the month and into June, heavy monsoon rains hit the area, leaving many more dead or missing, and forcing numerous evacuations as a result of flooding, say news reports. The provinces of Fujian, Guizhou, and Guangdong were the hardest hit.

This image shows rainfall totals over southeastern China as seen by the Tropical Rainfall Measuring Mission satellite (known as TRMM), from May 16 to June 1, 2006. The highest rainfall totals for the period (shown in red) are on the order of 500 millimeters (20 inches) and occur near the coast in the area around Hong Kong in the province of Guangdong. A widespread area of 450-millimeter (8-inch) rainfall totals (green) covers most of southeastern China, with locally heavier amounts of a foot or more (yellow and orange areas).

TRMM was placed into service in November 1997. From its low-earth orbit, TRMM has been measuring rainfall over the global Tropics using a combination of passive microwave and active radar sensors. The TRMM-based, near-real time Multi-satellite Precipitation Analysis (MPA) at the NASA Goddard Space Flight Center monitors rainfall over the global Tropics. TRMM is a joint mission between NASA and the Japanese space agency, JAXA.