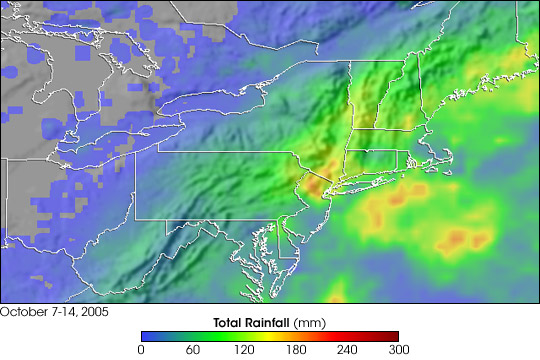 Rain was still falling a full week after a wet weather front moved up the U.S. East Coast. The rain had not abated when this image was created using data collected by the Tropical Rainfall Measuring Mission (TRMM) satellite between October 7 and October 14, 2005. The image shows rainfall totals in colors ranging from blue, lightest totals, to orange, the heaviest totals. The central and northern Appalachian Mountains are covered with a wide swath of yellow and green, representing 100-150 millimeters (4 to 6 inches) of rainfall. Orange over parts of northern New Jersey and southeastern New York State shows regions that received up to 200 millimeters (8 inches) of rain. As the rain continued to fall, flash floods swamped many regions, and rivers rose. Many evacuated in the face of flooding, say news reports.

The rain was brought to the region by a slow-moving frontal system. Stretching from the Florida panhandle to Maine, the front drew tropical moisture—including the remnants of Tropical Storm Tammy—up the East Coast. The front parked itself off the coast, allowing an area of low pressure to form just off of the Delmarva Peninsula. The low brought a second round of heavy rain to the Northeast.

The rainfall totals shown here were taken from the TRMM-based, near-real time Multi-satellite Precipitation Analysis (MPA) at NASA’s Goddard Space Flight Center. MPA provides rainfall estimates over the global Tropics. The image is an example of the value of the TRMM satellite, which was launched in November 1997 to provide better estimates of rainfall over the global Tropics. Since that time, TRMM has been providing unprecedented estimates of rainfall over the Tropics using its array of passive and active sensors.