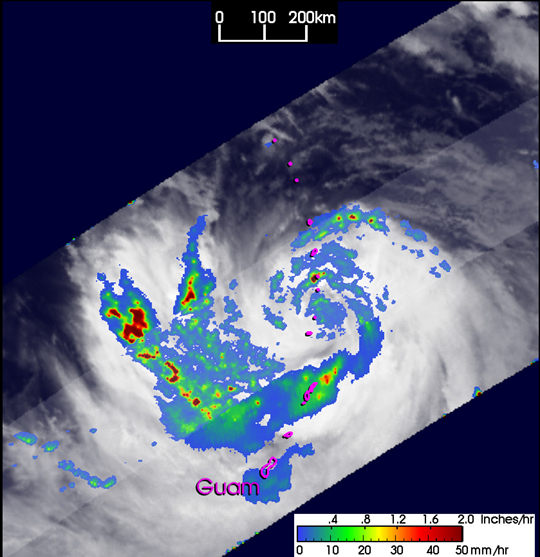 Tingting, at the time still a tropical storm, dumped record breaking rains on Guam over the weekend resulting in extensive flooding and mudslides. The weather service reported that 16 inches of rain fell on Sunday alone (local time). The tropical depression that would later become Tingting first formed on the 25th of June 2004 several hundred miles east-southeast of the southern Mariana Islands. The storm proceeded westward for a short time before turning northwest. The system slowly strengthened becoming a tropical storm on the 26th and a minimal typhoon on the 28th as it passed north of Saipan in the central Marianas. After passing through the island chain, the storm turned northward and is expected to pass close to Iwo Jima.

The Tropical Rainfall Measuring Mission (TRMM) satellite has been monitoring rainfall over the global tropics since its launch in November of 1997. Armed with its array of both passive and active sensors, TRMM has been able to image numerous tropical cyclones providing a unique perspective on their structures. Such is the case with Tingting as shown by the following images. The first image was taken at 4:28 UTC on 28 June 2004 just as Tingting was passing through the central Mariana Islands. It shows the horizontal distribution of rain intensity. Rain rates in the center swath are from the TRMM Precipitation Radar (PR), the first and only precipitation radar in space, and rain rates in the outer swath are from the TRMM Microwave Imager (TMI). These rain rates are overlaid on infrared (IR) data from the TRMM Visible Infrared Scanner (VIRS). This image shows that Tingting has a well-defined center of circulation as evidenced by the spiraling rainbands to the northeast (blue arches). However, the majority of the rainfall is contained in a large rainband well to the southwest of the center. This rainband contains areas of heavy (red), moderate (green) and light rain (blue). At the time of this image, Tingting was classified as a minimal typhoon by the Joint Typhoon Warning Center with winds estimated at 65 knots (75 mph). The second image was taken at 11:43 UTC on the 29th and reveals that the storm had become better organized with a more pronounced eye and a more symmetrical rainfield. However, rain intensities around the eye are rather light (blue areas). As tropical cyclones rely on condensational heating near their cores to maintain their circulations, the weak rain rates near the storm's center as revealed by TRMM means that Tingting is not likely to strengthen. Tingting was estimated to have sustained winds of 80 knots (92 mph) at the time of this image.

The TRMM-based, near-real time Multi-satellite Precipitation Analysis (MPA) at the NASA Goddard Space Flight Center provides quantitative rainfall estimates over the global tropics. The final two images show MPA rainfall totals for the period 25-28 June 2004 around Guam as a result of Tingting. The dark red area over Guam indicates rainfall on the order of 16 to 20 inches which is in excellent agreement with the reported values on the ground. The final image shows contoured values in mm.

Typhoons Tingting and Mindulle spin side by side in the Pacific Ocean.