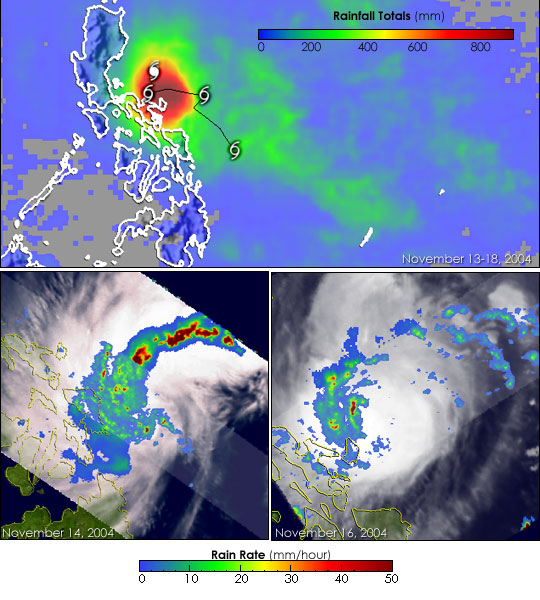 Typhoon Muifa (known as Unding in the Philippines) continues to bring torrential rains to the Philippines as the slow-moving storm passes through the north central part of the islands. The Tropical Rainfall Measuring Mission (TRMM) satellite with its array of passive and active sensors has been monitoring the progress of Muifa, providing valuable information on its location, structure and intensity to forecasters.

Muifa first became a tropical depression on November 11, 2004, south of the Caroline Islands in the West Pacific. The storm moved steadily northwest passing well north of Palau and just south of the Yap Islands before entering the Philippine Sea. Muifa slowly organized into a tropical storm on the 14th. The first TRMM image, lower left, shows Muifa at 16:11 UTC on November 14 as the storm neared the central Philippines. The image shows the horizontal distribution of rain intensity as seen from above by the TRMM satellite. Rain rates in the center swath are from the TRMM Precipitation Radar (PR), the first precipitation radar in space, while rain rates in the outer swath are from the TRMM Microwave Imager (TMI). The rain rates are overlaid on infrared (IR) data from the TRMM Visible Infrared Scanner (VIRS). TRMM shows that Muifa is not very well organized: it has no eye; its structure is very asymmetric; and only weak banding is evident in the moderate intensity rain field (green arcs). However, at this time, there are several areas of heavy rain with rates on the order of 2 inches per hour (dark red areas) in a large rainband north of the center.

The next TRMM image, lower right, shows Muifa two days later at 06:06 UTC on the November 16. Muifa was still a tropical storm with maximum sustained winds estimated at 45 knots (52 mph) by the Joint Typhoon Warning Center. The large rainband that was north of the center is no longer present. Instead, most of the rain is west of the center, and only localized areas of heavy rain (red areas) are present. Muifa still does not have an eye though the moderate rain immediately west of the center does show some banding (green arc). Muifa now finally began to intensify becoming a typhoon on November 17, and became a major typhoon on November 18, with maximum sustained winds approaching 213 kilometers per hour (132 mph). Fortunately the center remained offshore. However, the storm stalled just off the east coast of the northern and central islands of the Philippines, drenching parts of the islands with very heavy rainfall.

The TRMM-based, near-real time Multi-satellite Precipitation Analysis (MPA) at the NASA Goddard Space Flight Center monitors rainfall over the global tropics. The top image shows MPA rainfall totals for November 13 through November 18, 2004. It reveals an area of extreme rainfall on the order of 40 inches centered just east of the southern half of the main island of Luzon (dark red area). Most of southern Luzon and parts of the central Philippines received upwards of 10 to 20 inches of rainfall (green and yellow areas), while the island of Catanduanes and extreme southeastern Luzon may have been inundated by as much as 35 inches of rain (red to dark red areas). Storm symbols mark the 00Z positions beginning on November 15. So far, 3 persons have been reported to have drowned as a result of Muifa. The storm is expected to continue crossing Luzon and move west into the South China Sea.

The TRMM satellite tracks the development of Typhoon Muifa in this series of images.