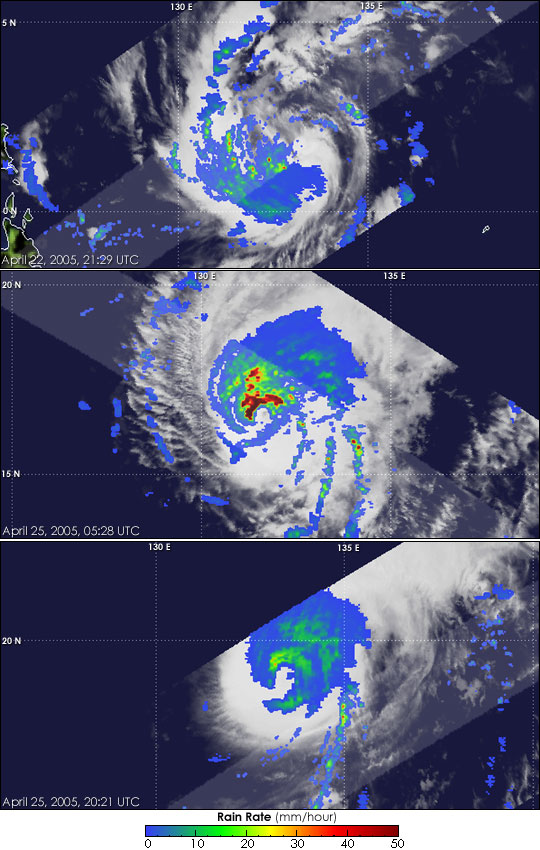 Although Typhoon Sonca briefly reached Category 4 intensity east of the Philippines, the storm remained over open waters without causing any damage. Sonca formed into a depression on the night of April 20, 2005, east of the Yap Islands in the West Pacific. Over the next couple of days, this depression moved west northwest, passed through the Yap Islands, and entered the southern Philippine Sea where it began to intensify.

This series of images shows the structure of the storm, as observed by NASA’s TRMM satellite, as Sonca intensified and then decayed between April 22, and April 25, 2005. Since its launch in 1997, the Tropical Rainfall Measuring Mission (TRMM) satellite has been providing valuable images and information on tropical cyclones throughout the tropics, especially over remote ocean areas.

TRMM acquired the top image at 21:29 UTC on April 22, while Sonca was still a depression in the southern Philippine Sea. The image shows the horizontal distribution of rain intensity (top down view) as viewed by TRMM. Rain rates in the center swath are from the TRMM Precipitation Radar (PR), and those in the outer swath are from the TRMM Microwave Imager (TMI). The rain rates are overlaid on infrared (IR) data from the TRMM Visible Infrared Scanner (VIRS). TRMM shows that Sonca has a fairly broad area of rainfall. Though most the rain is light in intensity (blue areas), moderate (green areas) and isolated areas of heavy rain (red) are also present and some weak banding is apparent as evidenced by the tendency of the moderate rain areas to lie in a large semi-circle, which is indicative of the presence of an organized circulation.

Sonca then underwent a period of rapid intensification, strengthening from a tropical storm on April 23, to a Category 4 typhoon on April 24, with maximum sustained winds estimated at 115 knots (132 mph) by the Joint Typhoon Warning Center. TRMM captured the center image at 05:28 UTC on April 25, after this intensification period. The PR shows a well-defined center with a continuous area of intense rainfall (dark red area) adjoining the western and northern part of the eye. Tight banding is also visible in the surrounding rain field. These are the characteristics of a mature intense cyclone.

By this time, however, Sonca was already beginning to feel the effects of an approaching mid-latitude trough and an accompanying cold front, and by 20:21 UTC on April 25, when TRMM acquired the bottom image, Sonca had degraded into a Category 3 storm. At that time, the storm was moving northward and would soon move northeast and begin to weaken. In this image, the storm’s center is not within the PR swath. Peak rain intensities have diminished, and the eye now appears elongated as Sonca feels the effects of windshear induced by the mid-latitude trough. Following this image, Sonca continued to weaken and raced off to the northeast, passing close to Iwo Jima April 26, before being absorbed by the mid-latitude frontal system.