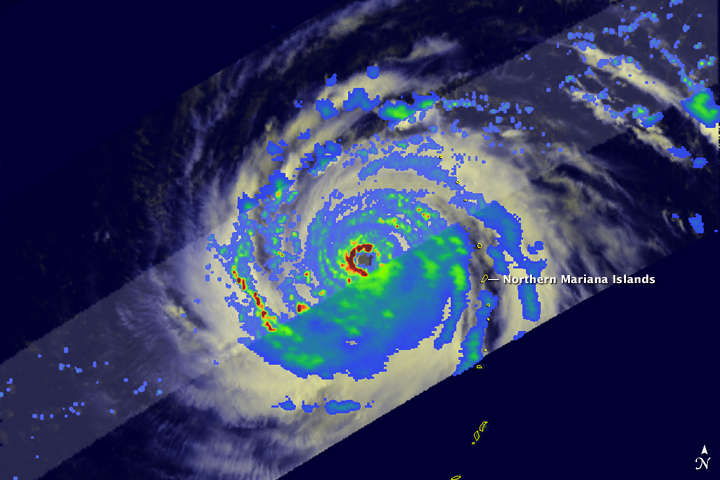 Choi Wan began as a tropical depression on September 12, 2009, about 800 kilometers (500 miles) east-southeast of Saipan. By September 15, the storm had become the third Category 4 typhoon of 2009 in the Pacific basin, and by September 16, it was the first Category 5 storm of the Pacific season. The Tropical Rainfall Measuring Mission satellite (TRMM) captured this image of Choi-wan at 9:20 a.m. local time on September 16 (23:20 UTC, on September 15), as the storm moved northwest over the eastern Philippine Sea after passing the Northern Mariana Islands.

The image shows the horizontal distribution of rain intensity inside the storm. The heaviest rain is shown in red, while lighter rainfall is represented in blue. Rain rates in the center of the swath are from the TRMM Precipitation Radar, the only spaceborne radar of its kind, while those in the outer portion are from the TRMM Microwave Imager. The rain rates are overlaid on infrared data of clouds from the TRMM Visible Infrared Scanner.

At the time that TRMM made these observations, Choi-wan had a near-perfect eye (dark center) surrounded by a very intense eyewall (darker red semicircle indicating very heavy rain) on its western side. Overall the storm was also very symmetric, both in its cloud (white areas) and rain patterns. This highly symmetrical structure is a manifestation of its extreme intensity and cyclonic structure, cloud and rain features were being quickly wrapped around in a circular orientation. At the time of this image, Choi-wan was a Category 5 super typhoon with sustained winds estimated at 260 kilometers per hour (160 miles per hour or 140 knots), according to the Joint Typhoon Warning Center. The storm was expected to re-curve to the north and remain east of Japan.

TRMM has served as a valuable platform for monitoring tropical cyclones since its launch in 1997, especially over remote parts of the ocean. TRMM is a joint mission between NASA and the Japanese space agency, JAXA.