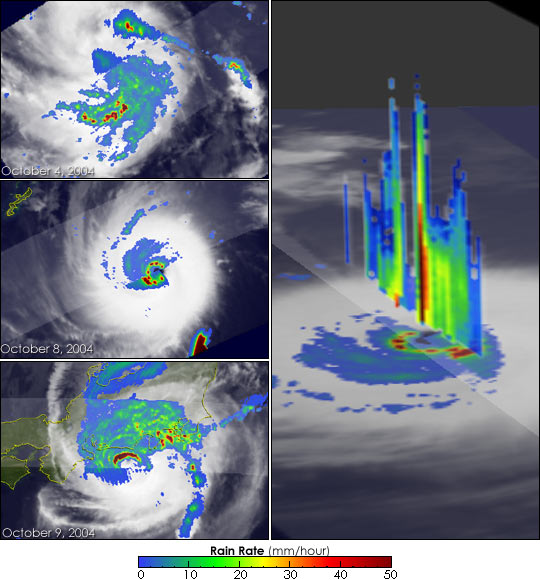 The Tropical Rainfall Measuring Mission (TRMM) satellite provides unique images of tropical cyclones that can be used to provide valuable information on their intensity and location, especially over remote parts of the open ocean. These images from TRMM show Typhoon Ma-on (26W) in the West Pacific both as a weak tropical depression, top left, and later as a very powerful super typhoon, center left, and back to a typhoon headed for Japan, lower left. Ma-on moved ashore over Shizuoka, a city 150 kilometers (93 miles) west of Tokyo, on October 10, 2004, before heading on to Tokyo. It is the record ninth typhoon to strike Japan in 2004, and the strongest to hit eastern Japan in the past ten years. According to local media reports, the storm left at least six people dead, just one week after Typhoon Meari killed 27.

These TRMM images show the development of the storm. The first image, top left, was taken at 03:20 UTC on the October 4, 2004. At the time of this image, Ma-on was categorized as a tropical depression by the Joint Typhoon Warning Center with maximum sustained winds estimated at just 56 kilometers per hour (35 mph). The image shows a horizontal map of the near surface rainfall intensity obtained from the TRMM satellite. Rain rates in the center portion of the swath are from the TRMM Precipitation Radar or PR, the first and only precipitation radar in space. The PR provides fine resolution rainfall data and details on its vertical structure. Rain rates in the outer swath are from the TRMM Microwave Imager or TMI. The rain rates are overlaid on infrared (IR) data from the TRMM Visible Infrared Scanner (VIRS).

The top left image shows a large area of light (blue areas) to moderate intensity (green areas) rainfall with several embedded, localized areas of intense rainfall (dark red areas) with rain rates on the order of 50 millimeters per hour. The rain field, however, is still loosely organized with a slight amount of banding evident by the arcs in the moderate (green) intensity rain. Ma-on became a tropical storm a short time later.

Ma-on intensified slowly at first, remaining a tropical storm on the 5th and becoming a Category 1 typhoon on the 6th. On the 7th of October, Ma-on underwent what is known as rapid intensification and jumped from a Category 1 storm to a Category 5 storm in the span of just 24 hours. The second image, center left, was taken at 02:54 UTC on October 8, just after Ma-on had completed its cycle of rapid intensification. This TRMM image reveals a small, tight eye surrounded by a complete, symmetrical eyewall of moderate (green) to intense rain (red areas), characteristic of a mature, intense cyclone. The lower right portion of the eyewall is missing due to an artifact in the data. At the time of this image, Ma-on was estimated to have sustained winds of 260 kilometers per hour (161 mph), a powerful Category 5 super typhoon.

The right image was also taken on October 8, and shows a vertical slice through the center of Ma-on looking from the west taken by the PR. The image shows an area of extremely intense rain (black vertical area) extending vertically upward associated with the eyewall. This rain extends well above the melting band (horizontal area of brighter yellows) and indicates very strong convection. Ma-on was expected to weaken slightly as it headed for the southern islands of Japan.

The lower left image shows Typhoon Ma-on at 05:16 UTC on October 9, the day before it moved ashore. TRMM reveals that Ma-on had weakened significantly as forecast. In contrast to the symmetrical structure of the eye seen the previous day, the eye now appears elliptical and is open on the southeast quadrant. A band of intense rain (dark red arc) marks the northern half of the eyewall. Overall, the vast majority of the rain associated with Ma-on is north of the center (broad blue and green area). At the time of this image, Ma-on was a much weaker but still strong typhoon. Its maximum sustained winds diminished from an estimated 213 kilometers per hour (132 mph) at 00:00 UTC to 90 knots (104 mph) by 06:00 UTC, just after this image was taken. Ma-on originally began as a tropical depression on September 28, east of the Northern Mariana Islands.

Typhoon Ma-on was the ninth typhoon to strike Japan in 2004, and the most powerful to come ashore over eastern Japan in the past 10 years. This series of TRMM images shows the storm's development from tropical depression to powerful super typhoon back to typhoon before it made landfall on October 10, 2004.