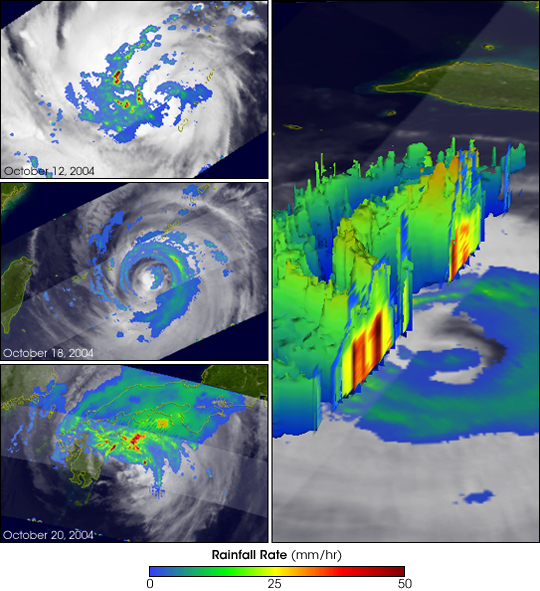 As it passes high above the equatorial tropics, the Tropical Rainfall Measuring Mission (TRMM) satellite collects data and images of tropical cyclones that can be used to provide valuable information on their intensity and location, especially over remote parts of the open ocean. This set of TRMM images follow Typhoon Tokage (27W) from its birth in the central West Pacific Ocean east of the Mariana Islands to its impact on the southeast coast of Japan.

The first image (top left) was taken at 22:19 UTC on October 12, 2004, when the storm was still organizing after having passed through the central Marianas. At the time of this image, the Joint Typhoon Warning Center classified Tokage as a weak tropical storm with maximum sustained winds estimated at 35 knots (40 mph). The image shows a horizontal map of the near surface rainfall intensity obtained from the TRMM satellite. Rain rates in the center portion of the swath are from the TRMM Precipitation Radar, the first and only precipitation radar in space, which provides fine resolution rainfall data and details on its vertical structure. Rain rates in the outer swath are from the TRMM Microwave Imager. The rain rates are overlaid on infrared data from the TRMM Visible Infrared Scanner. The image shows no evidence of an eye though good banding is apparent in the rain field (blue arcs) and in the cloud field as indicted by the swirls in the underlying clouds. Some moderate (green) to heavy (red) rain areas appear west of the center.

Over the course of the next several days, Tokage intensified, becoming a major Category 4 typhoon on October 17 with maximum sustained winds estimated at 125 knots (144 miles per hour). The storm moved west then turned north and began to weaken. The next image (large image on right) shows Tokage on October 18 at 05:04 UTC. Tokage was now a Category 3 storm with winds of 105 knots (121 mph). The cut-away view shows a vertical cross section of the rain intensity as measured by the precipitation radar. This image provides an excellent perspective on the structure of the rainbands whereby moderately high towers of clouds (green tops) are separated by lower areas of rain (blue sides). The highest towers as indicated by the red shading are closest to the center. The vertical cross section reveals the bands of very intense rain (dark red areas) of 2 inches per hour. Tokage had a very large eye at this time.

The next image (middle left) was taken less than a day later at 21:36 UTC on October 18 when Tokage was south of Okinawa. Similar to the first image, this top down view shows an excellent example of the large eye associated with Tokage. Typically tropical cyclones develop large eyes as powerful storms weaken and their associated wind field spreads horizontally outward from the center. Most of the rain intensity is now light (blue) to moderate (green).

The final image (bottom left) was taken at 01:35 UTC on October 20 as Tokage came ashore over Japan. The eye is no longer visible and Tokage was downgraded to a tropical storm. However, good banding still exists in the rain field north of the center (green arcs) and areas of heavy to intense rain (darker red areas) are occurring over the coastline. This is likely a result of the storm’s circulation interacting with the topography of Japan. According to early news reports, the storm caused at least 18 deaths in Japan with numerous others missing due to flooding, mud slides and large waves. Tokage, which means lizard in Japanese, became the record eighth storm to strike Japan in the 2004 typhoon season.

Typhoon Tokage became the record eighth typhoon to strike Japan in 2004 when it moved over the island nation on October 20. This series of images shows the storm from the perspective of the TRMM, MODIS, and SeaWiFS sensors.