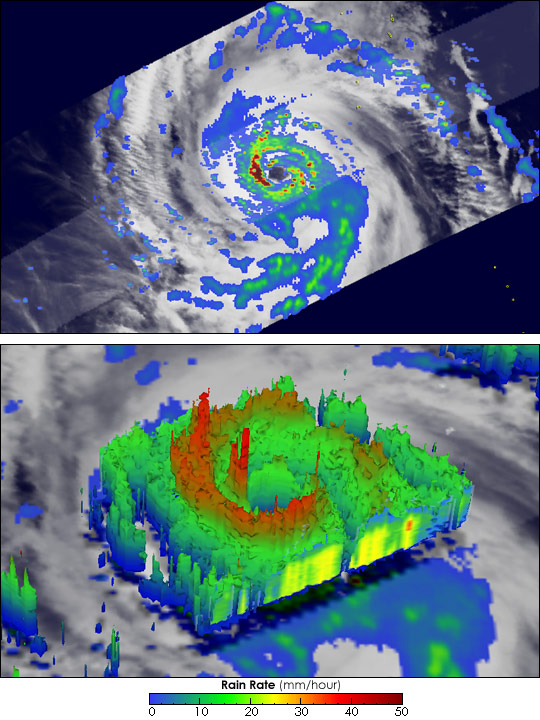 Typhoon Usagi gathered strength as it moved over the West Pacific on a course for southern Japan in late July 2007. The storm was a well-organized, Category 2 storm when the Tropical Rainfall Measuring Mission (TRMM) satellite captured these images on July 31, 2007. The top image shows the horizontal distribution of rain intensity looking down on the storm. Dark red circles of intense rain spiral out from a small, defined eye (dark center), with the largest area of intense rain on the west side of the storm. The storm’s organization is evident in its symmetry: concentric rain bands surround the center. Rain rates in the center of the swath are from the TRMM Precipitation Radar, while those in the outer portion are from the TRMM Microwave Imager. The rain rates are overlaid on infrared (IR) data from the TRMM Visible Infrared Scanner (VIRS).

The lower image shows a three-dimensional view of Usagi at the same time. Areas of intense rain are associated with towering clouds known as convective towers. As water vapor rises, it cools and condenses into rain, releasing heat. It is this heat that feeds the storm. The higher water vapor rises before cooling, the more intense the storm tends to be. In this image, two tall towers (in red) border on the eye, indicating that Usagi is likely to continue to intensify as the towers release heat into the storm’s core. Behind these is a partial ring of towering clouds that could be the beginning of an outer eyewall. At the time that TRMM captured these images, Usagi’s sustained winds were estimated at 167 kilometers per hour (90 knots or 104 miles per hour). Soon after, Usagi was upgraded to a Category 3 cyclone with sustained winds estimated at 194 km/hr (105 knots or 121 mph). Usagi was expected to strengthen even further before possibly making landfall in southern Japan.

The Tropical Rainfall Measuring Mission satellite was placed into low-Earth orbit in November 1997 with the primary mission of measuring rainfall from space; however, it has also served as a valuable platform for monitoring tropical cyclones, especially over remote parts of the open ocean.