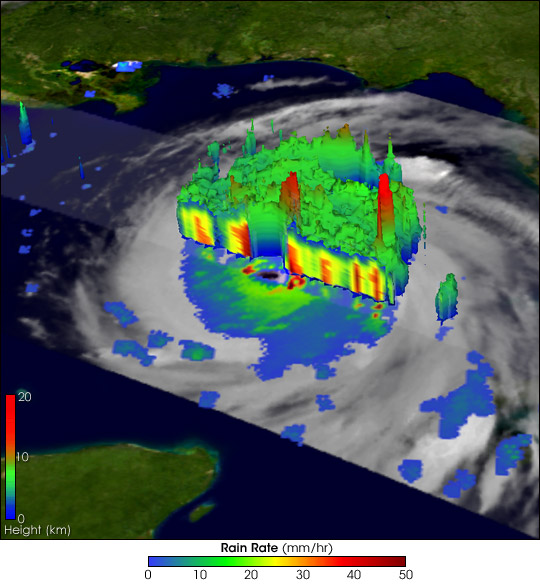 The 2005 hurricane season will long be remembered both for the record-breaking number of early storms and for the emergence of a powerful Category 5 hurricane in the central Gulf of Mexico—Hurricane Katrina. NASA’s Tropical Rainfall Measuring Mission satellite (TRMM) captured this three-dimensional view of the storm early on August 28, 2005, as Katrina was strengthening into a Category 4 storm in the Central Gulf of Mexico.

The image shows a cut-away view of the eye of the storm with cloud height on one side of the eye and rain rates on the other. At the time of the image, Katrina was still a Category 3 storm, with maximum sustained winds reported of 100 knots (115 mph). TRMM reveals that Katrina had a closed eye surrounded by concentric rings of heavy rain (red areas) that are associated with outer rain bands. The intense rain near the core of the storm—shown in the “flat” half of the image—indicates where heat, known as latent heat, is being released into the storm. This latent heat release is what drives the storm’s circulation.

The 3D perspective of Katrina shows the height of rain columns within the hurricane. Tall rain columns provide a clue that the storm is strengthening. As water vapor rises, it cools and condenses into rain, releasing heat. It is this heat that feeds the storm. The higher water vapor rises before cooling, the more intense the storm tends to be. In this image, two isolated tall towers (in red) are visible: one in an outer rain band and the other in the northeastern part of the eyewall. The eyewall tower rises 16 kilometers above the ocean’s surface and is associated with an area of intense rainfall. Towers this tall near the core are often an indication of intensification, as was true with Katrina, which became a Category 4 storm soon after this image was taken.

Launched in November 1997 to measure rainfall over the global tropics, TRMM has shown itself to be a valuable instrument for observing tropical cyclones. In this image, rain rates in the central portion of the swath are from the TRMM Precipitation Radar (PR), the only radar capable of measuring precipitation from space. The PR is able to provide fine resolution rainfall data and details on the storm’s vertical structure. Rain rates in the outer swath are from the TRMM Microwave Imager (TMI). The rain rates are overlaid on infrared (IR) data from the TRMM Visible Infrared Scanner (VIRS).