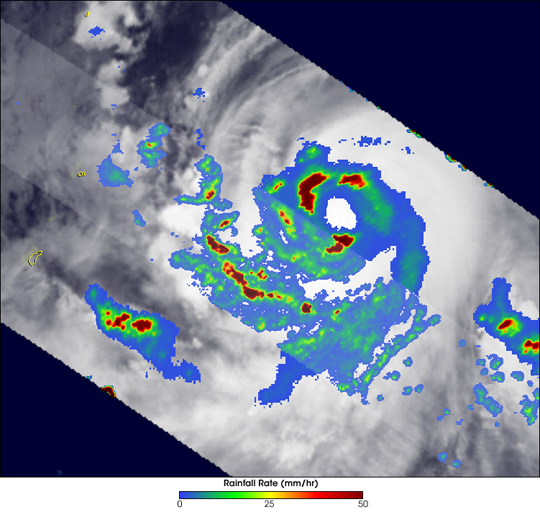 The Tropical Rainfall Measuring Mission or TRMM satellite continues to provide its unique perspective on tropical cyclones as shown by these images of Super Typhoon Chaba. The images and data help to provide valuable information on storm intensity and location especially over remote parts of the open ocean. The image displayed was taken at 09:44 UTC on 21 August 2004. At the time of this image, Chaba was a Category 1 typhoon located east of the Northern Mariana Islands with winds estimated at 70 knots (81 mph) by the Joint Typhoon Warning Center. The image shows a horizontal map of the near surface rainfall intensity obtained from the TRMM satellite. Rain rates in the center portion of the swath are from the TRMM Precipitation Radar or PR, the first and only precipitation radar in space. The PR is able to provide fine resolution rainfall data and details on its vertical structure. Rain rates in the outer swath are from the TRMM Microwave Imager or TMI. The rain rates are overlaid on infrared (IR) data from the TRMM Visible Infrared Scanner (VIRS). In this image, a large, closed eye is apparent. Areas of heavy to intense rain (dark red areas) are embedded within a loose ring of moderate rainfall (green areas) surrounding the eye. Rainfall is a good indication of condensation. As water vapor condenses into tiny cloud droplets, heat is released. This heat known as latent heat is what helps to drive the storm's circulation. It is most effective when it occurs near the center of the storm.

In contrast to the first image, the second image (link below August 21 image), was taken approximately four days later at 07:36 UTC on the 25th when Chaba was over the north central Philippine Sea, shows a much more intense cyclone. In this image, the eye is much smaller and tighter and more symmetrical. At this particular moment, intense rainfall is occurring right along the western edge of the eyewall (dark red semicircle). At the time of this second image, Chaba was estimated to have sustained winds of 145 knots (167 mph) making it a powerful Category 5 super typhoon. Chaba is expected to weaken as it heads for the southern islands of Japan. The storm originally began as a tropical depression back on the 18th of August just northeast of Enewetak Atoll in the Marshall Islands.

The MODIS instrument aboard NASA's Terra satellite captured this true-color image of Typhoon Chaba on August 29 at 1:45 UTC.