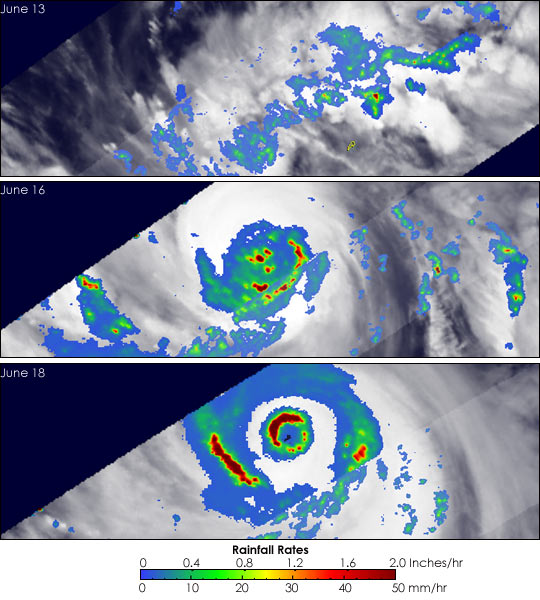 Once a powerful super typhoon, Dianmu is still a dangerous storm as it churns its way through the western Pacific headed for the southern islands of Japan. Dianmu was identified as a tropical depression on June 13, 2004, south of the Yap Islands and was quickly upgraded to a tropical storm. The next day, Dianmu went from a tropical storm to a minimal typhoon as it entered the southern part of the Philippine Sea heading generally northward. From 00Z on the 15th to 00Z on the 16th, Dianmu underwent rapid intensification with estimated sustained winds surging from 70 knots (81 mph) to 150 knots (173 mph), transforming it into a super typhoon. Fortunately, the storm was well away from any land masses. Dianmu remained a super typhoon until 12Z on the 17th as it moved north-northwest through the central Philippine Sea. At 12Z on the 18th, Dianmu was still a very powerful storm Category 4 storm with maximum sustained winds of 130 knots (150 mph). On its current track, the storm is expected to pass east of Okinawa and is forecast to weaken as conditions become less favorable as it approaches the main islands of southern Japan.

The Tropical Rainfall Measuring Mission (TRMM) satellite monitored Dianmu’s progress as it strengthened in the West Pacific. The top image was taken at 11:48 UTC on June 13, 2004. The image shows the horizontal distribution of rain intensity. Rain rates in the center swath are from the TRMM Precipitation Radar (PR), while rain rates in the outer swath are from the TRMM Microwave Imager (TMI). The rain rates are overlaid on infrared (IR) data from the TRMM Visible Infrared Scanner (VIRS). At the time of the first image, Dianmu was still a tropical depression with winds estimated at just 30 knots (35 mph) by the Joint Typhoon Warning Center. TRMM shows a rather disorganized area of moderate (green) to light (blue areas) intensity rain with only weak evidence of a center. The center image was taken at 10:40 UTC on the 16th when Dianmu was a super typhoon. The PR did not pass over the center, but the IR data (white area) does show a very symmetrical cloud shield. The TMI captures some of the rainbands south of the center which have embedded areas of intense rainfall (dark red areas). The bottom image was taken at 10:26 UTC on the 18th when Diamu was classified as a Category 4 storm with sustained winds of 130 knots (150 mph). TRMM reveals that Dianmu has what is termed a “double eyewall” structure that can occur in the most powerful tropical cyclones. It is apparent by the two concentric rings in the rain field. The northwestern half of the inner eyewall is made up of very intense rainrates (dark red areas) with intense rainrates also visible in the western portion of the outer eyewall. Eventually the outer eyewall will contract and replace the inner one.