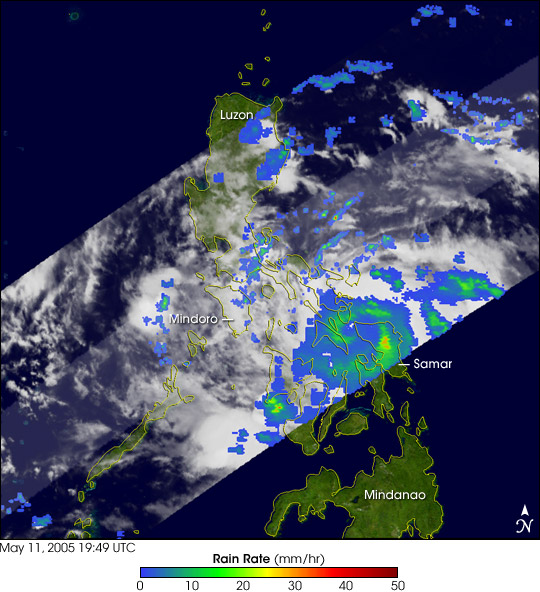 Typhoon Chanchu (known as Caloy in the Philippines) brought strong winds and heavy rains to the central Philippines as the storm passed through the mid-section of the country. Though not a particularly powerful storm, Chanchu was responsible for 8 reported deaths as of May 14, 2006, six of which occurred when a boat capsized while traveling between islands, according to news reports. Chanchu became a tropical depression on May 9, 2006, east of Mindanao, the largest island in the southern Philippines. The system then organized into a tropical storm and moved west-northwest before making landfall on the island of Samar in the central Philippines on the evening of May 11, as a Category 1 typhoon. Chanchu regained strength, briefly becoming a Category 2 storm, as it passed between the central islands before hitting Mindoro Island and weakening somewhat.

The Tropical Rainfall Measuring Mission (TRMM) satellite captured this observation of Chanchu as the storm was passing through the central Philippines on May 11, 2006, at 19:49 UTC (May 12, 3:49 a.m. local time). This visualization shows rain intensity as measured from the TRMM satellite. Rain rates in the center swath are from the TRMM Precipitation Radar, while rain rates in the outer swath are from the TRMM Microwave Imager. The rain rates are overlaid on infrared data from the TRMM Visible Infrared Scanner. TRMM revealed that Chanchu has a large, partial eye-wall west of its center (blue-green arc) and is very asymmetric, with most of the rain also west of the center of circulation (blue and green areas). Areas of intense rain (around 50 millimeters per hour) are shown in this image as the darker reds.

TRMM is a joint mission between NASA and the Japanese space agency, JAXA. Since its launch in 1997, TRMM has provided valuable information on tropical storms. With an active radar and a passive microwave sensor, TRMM can peer into the core of these storms and relay details on storm structure and location to forecasters.