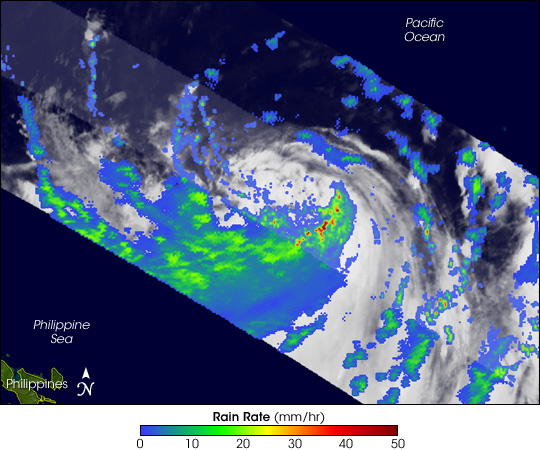 Although the center of Tropical Storm Bilis (known as Florita in the Philippines) passed well to the north of Luzon, it has been blamed for at least 14 fatalities on the island as a result of flash floods, mudslides, and wind damage. The storm formed as a tropical depression on July 8, 2006, south of Guam. The depression intensified into a tropical storm the following day as it crossed the central Philippine Sea and assumed a more northwesterly track.

In this image, Bilis appears as a highly asymmetrical storm, with the vast majority of the rain occurring south of the center in a rather large band (broad green and blue area). The actual center itself was rather poorly defined. Near the time of this image, the Joint Typhoon Warning Center estimated the maximum sustained winds to be 92 kilometers per hour (58 miles per hour), the equivalent of a moderate tropical storm. As Bilis continued to track to the northwest, this band of rain and its associated circulation came ashore over Luzon in the northern Philippines. Although the storm’s center remained well off the coast, the interaction of heavy rain and mountainous terrain led to flash flooding and mudslides.

The Tropical Rainfall Measuring Mission satellite (known as TRMM) was placed into service in November of 1997. From its low-earth orbit, TRMM has been providing valuable images and information on storm systems around the Tropics using a combination of passive microwave and active radar sensors, including the first precipitation radar in space. TRMM is a joint mission between NASA and the Japanese space agency, JAXA.