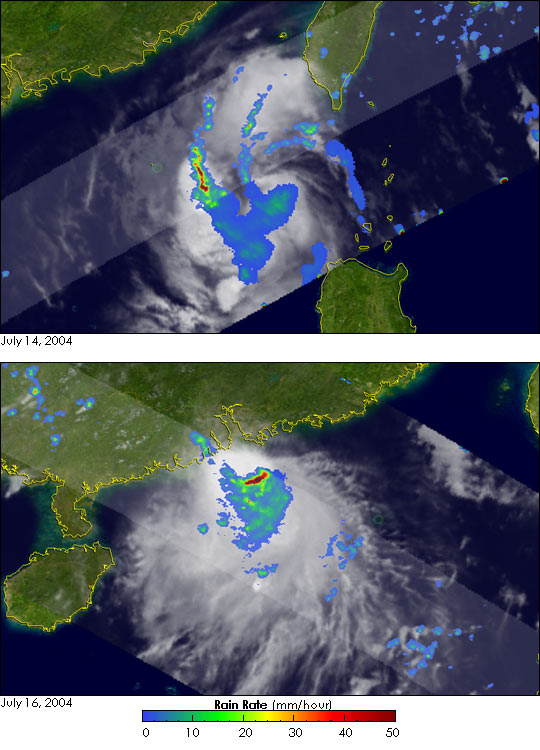 Tropical Storm Kompasu hit the southern coastline of China near Hong Kong on Friday July 16, 2004 with winds of up to 45 mph. No significant damage was reported, but 12 people were injured by the storm. Kompasu formed into a tropical depression in the central Philippine Sea on the 10th of July. The system moved due west through the Luzon Strait south of Taiwan and emerged into the northern South China Sea. Kompasu strengthened only minimally becoming a weak tropical storm on the 14th as it passed through the strait. The storm then turned northwest before striking the south coast of China.

The Tropical Rainfall Measuring Mission or TRMM satellite has so far continued to fulfill its mission of monitoring rainfall over the global tropics since its launch in November of 1997. With its array of passive and active sensors, TRMM has also been providing a unique perspective on tropical cyclones. Such was the case with Kompasu. The first image, top, was taken at 22:21 UTC on July 14, 2004, after Kompasu had entered the northern South China Sea. Kompasu was then a tropical storm with maximum sustained winds estimated at 45 knots (52 mph) by the Joint Typhoon Warning Center. The image shows the horizontal distribution of rain intensity. Rain rates in the center swath are from the TRMM Precipitation Radar (PR), the first and only precipitation radar in space, and those in the outer swath are from the TRMM Microwave Imager (TMI). The rain rates are overlaid on infrared (IR) data from the TRMM Visible Infrared Scanner (VIRS). This particular image reveals only a partially organized storm. Some banding is evident in the rain field (blue and green arcs), but the storm does not have an eye and nor is there any significant rainfall nears its center. This indicates that Kompasu is not likely to intensify very rapidly.

The second image was taken at 05:35 UTC on the 16th just as Kompasu was about to hit the coast of China. The storm is still lacking an eye, and rain field is very asymmetrical with most of the rain located south or southeast of the center (blue, green and red areas). The heaviest rain (red) appears just south of the center. Maximum sustained winds at this time were only estimated to be about 40 knots (46 mph).

TRMM data and images are routinely used by operational centers such as the NOAA Hurricane Prediction Center and the Joint Typhoon Warning Center.