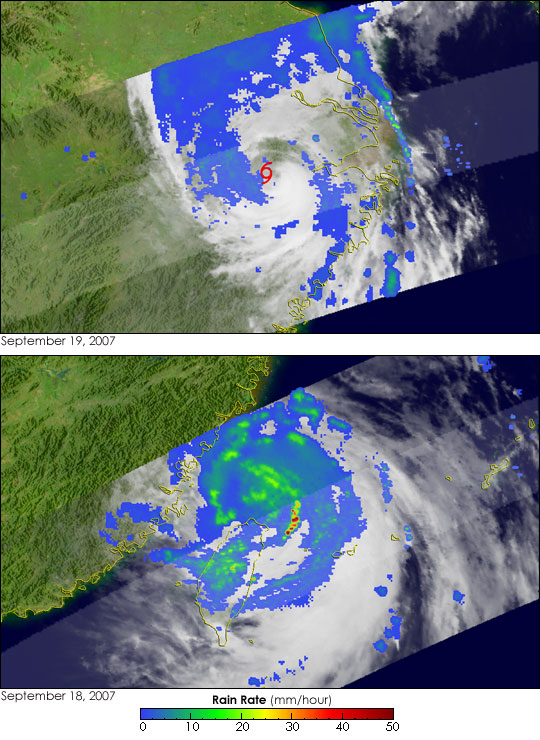 The top image provides a unique view of the remains of Typhoon Wipha about 16 hours after the center of the storm made landfall near Cangnan, in southern Zhejiang province on the east coast of China. The image was taken by the Tropical Rainfall Measuring Mission (TRMM) satellite at 7:11 pm local time (11:11 UTC) on September 19, 2007, and it shows the horizontal pattern of rain intensity within the storm. Rain rates in the center of the swath are from the TRMM Precipitation Radar, and those in the outer swath come from the TRMM Microwave Imager. The rain rates are overlaid on infrared data from the TRMM Visible Infrared Scanner.

At this stage, Wipha no longer had a defined eye. Instead, the center of circulation was surrounded by broken areas of mostly light rain (blue areas). Most of the rain is farther to the north (larger blue area). Wipha was a Category 3 typhoon just before landfall, with sustained winds estimated at 100 knots (115 mph) by the Joint Typhoon Warning Center. At the time of the TRMM overpass on September 19, sustained winds were down to 50 knots (58 mph). Most tropical cyclones weaken quickly after making landfall. Without active, deep convection near the center to fuel the storm, the circulation will spin down.

The change in shape and intensity are evident in comparing the September 19 image to an image made with data collected on September 18. Just before Wipha made landfall, its center was defined by circular bands of heavy rain, shown in green and yellow in the lower image. A small band of extremely intense rain, depicted in red, is southeast of the storm’s center. By the next day, Wipha no longer exhibited the structured bands of rain seen on September 18.

Wipha became a tropical storm on September 16 in the central Philippine Sea. The system tracked northwestward and quickly intensified to a Category 4 storm as it approached Taiwan. Although the center passed northeast of Taiwan, Wipha was blamed for one fatality on the island. As of September 20, two persons had been reported dead in China as a result of the storm, said news reports.

Super Typhoon Wipha was a powerful Category 4 typhoon when it approached the densely populated East China coast on September 18, 2007.