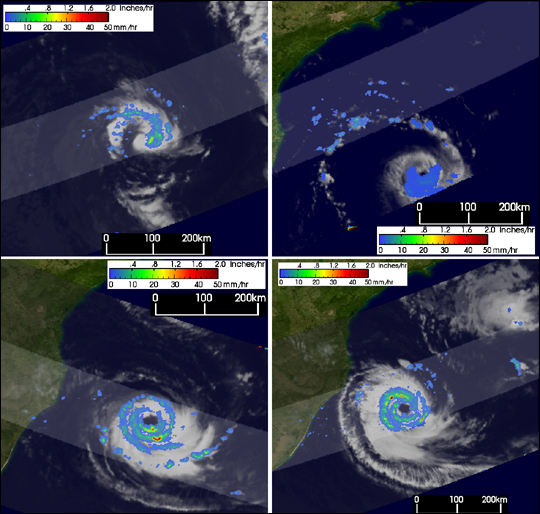 Since the beginning of the satellite era in the mid-1960's, no hurricane has ever been observed in the South Atlantic according to forecasters at the National Hurricane Center. But on Sunday morning, March 28th, 2004, a storm struck the Brazilian coast that may have changed all of that as forecasters believe it to be the first hurricane ever recorded in that region of the world. The unnamed storm made landfall near the town of Torres just south of the resort town of Laguna in the southern Brazilian state of Santa Catarina, about 500 miles south of Rio de Janeiro. There were reports of winds as high as 100 kph (62 mph) in the area. So far reports indicate that 2 persons were killed by the storm with 500 homes destroyed and 20,000 homes damaged leaving 1500 people homeless. The search also goes on for 11 fisherman missing at sea after their 2 boats sank in 13-foot seas off the coast.

There is some debate, however, as to whether this storm was actually a true hurricane. Typically, strong wind shear in this part of the South Atlantic makes conditions unfavorable for tropical storm development. However, as has often been seen in the North Atlantic, extratropical systems that move over warm waters can become transformed into tropical systems and take on tropical characteristics. This storm appears to have originated as an extratropical low that moved off the Brazilian coast on the 20th that then became "cutoff", meaning it became separated from the the main air flow, on the 22nd of March. Sea surface temperatures were in the mid-70s (in degrees Fahrenheit), about the minimum needed for tropical storm formation. Meteorologists refer to tropical low pressure centers as warm cores because the air in the center of the circulation is warmer then the surrounding environmental air. Extratropical cyclones are typically cold core. The Brazilian weather service believes that the storm was extratropical in nature. As such a storm had thus far never been recorded in that area, there were no aircraft available to study the storm, leaving satellites to do the job of estimating its strength and structure.

The Tropical Rainfall Measuring Mission (TRMM) satellite is designed to measure rainfall over the global tropics using the combination of a microwave sensor and the first and only precipitation radar in space. TRMM was able to capture several unique images of the storm as it made its way through the South Atlantic. The first image (top left) was taken at 12:13 UTC on 24 March 2004. It shows the horizontal distribution of rain rates as seen from above by the TRMM satellite. Rain rates in the center swath are from the TRMM Precipitation Radar (PR), while rain rates in the outer swath are from the TRMM Microwave Imager (TMI). These rain rates are overlaid on infrared (IR) data from the TRMM Visible Infrared Scanner (VIRS). It shows a comma-shaped cloud pattern indicative of an area of low pressure, but there is no indication of an eye and rain rates are mostly weak (blue areas) with only a few, localized areas of moderate intensity rain (green areas).

The next image (top right) taken over two days later at 12:01 UTC on the 26th shows that the storm had become much better organized with an eye apparent in the IR data. A long rainband continues to spiral out from the center extending well out ahead of system as it continues to track off to the west. The PR did not pass over the center in this image, but the TMI indicates a broad, but weak, area of rainfall south of the center. The third image (bottom left) was taken less than a day later at 06:11 UTC on the 27th. The storm now has a clearly defined eye in the IR data, and this time the PR passes directly over the center revealing a nearly complete eyewall with mostly moderate intensity rain (green area) in the southern portion and well-defined spiral banding in the rainfield surrounding the eye with a couple of localized areas of heavy (red areas) rainfall. An estimate by the AMSU (Advanced Microwave Sensor Unit) satellite put the storm's central pressure at 979 mb, equivalent to a minimal Category 2 hurricane on the Saffir-Simpson scale. The final images (bottom right and link) were taken at 11:00 UTC on the 27th of March as the storm was nearing the coast of southern Brazil. It now has a large, well-defined eye and a complete eyewall though rainrates in the eyewall are not particularly intense. The IR image also shows that the storm has a well-developed outflow pattern as cirrus clouds extend out to the west and south of the center. The final image shows a vertical slice through the center. It reveals mainly moderate intensity (yellow areas) rain with an embedded area of heavy rain (red area) in the western eyewall. A single area of intense rain (darker red area) appears in an outer rainband east of the center.

The Tropical Rainfall Measuring Mission (TRMM) satellite is designed to measure rainfall over the global tropics using the combination of a microwave sensor and the first and only precipitation radar in space.