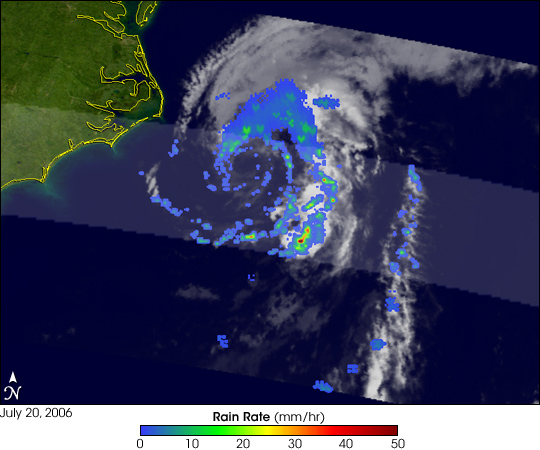 Tropical Storm Beryl, the second named storm of the 2006 Atlantic hurricane season, formed off the Carolinas early in the day on July 18. Initially, the developing system was designated “TD #2” as the second tropical depression in 2006 to form in the Atlantic. TD #2 moved northward and slowly strengthened, becoming Tropical Storm Beryl by that evening.

The Tropical Rainfall Measuring Mission satellite (TRMM) captured this image of Beryl as the storm tracked northward just east of the Outer Banks. Rain rates in the center swath are from the TRMM Precipitation Radar, and rain rates in the outer swath are from the TRMM Microwave Imager. The rain rates are overlaid on infrared data from the TRMM Visible Infrared Scanner. The appearance of banding or curvature in the rain field (green arcs) is evidence of a developing low-pressure circulation pattern. Beryl showed the classic signature of a tropical cyclone with rain bands (as shown in blue) spiraling around the center. However, TRMM also showed that Beryl did not have a well-developed eyewall, with little rain surrounding the center. The lack of any strong convection (uprising air) near the center, which would show up in the rain intensity observations, indicated that Beryl was not poised to intensify at that time. The image was taken at 4:07 UTC (12:07 a.m. Eastern Daylight Time) on July 19, 2006. At the time of this image, Beryl was a weak tropical storm with maximum sustained winds reported at 65 kilometers per hour (40 miles per hour) by the National Hurricane Center.

TRMM was placed into service in November of 1997. From its low-earth orbit, TRMM has been providing valuable images and information on storm systems around the tropics using a combination of passive microwave and active radar sensors, including the first precipitation radar in space. TRMM is a joint mission between NASA and the Japanese space agency, JAXA.