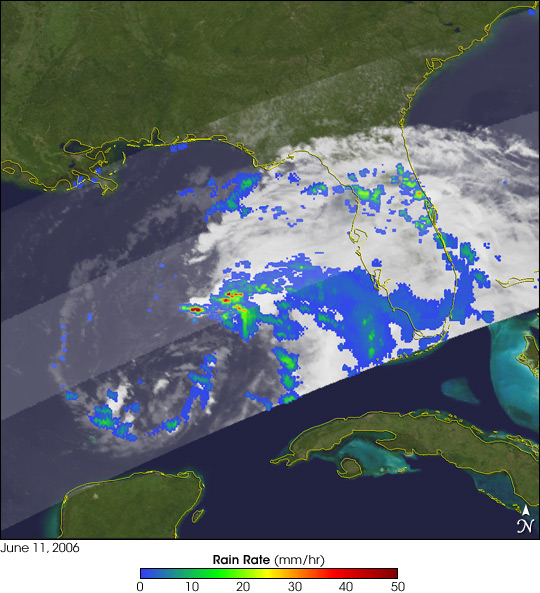 Alberto began as a tropical depression on the morning of June 10, 2006, having formed from an area of low air pressure over the northwestern Caribbean Sea. This depression moved generally northwestward through the Yucatan Channel between western Cuba and the Yucatan Peninsula and into the south-central Gulf of Mexico. The system was rather poorly organized as a result of southwesterly wind shear. This shear pulled the weather system from the rounded shape of a typical tropical storm and gave Alberto an elongated center of circulation. Nonetheless, hurricane hunter aircraft and ships reported strong winds, and on that basis, the National Hurricane Center (NHC) classified the system as a tropical storm and gave it the name Alberto at 11:00 a.m. EDT on June 11.

This visualization shows data collected by the Tropical Rainfall Measuring Mission satellite (TRMM) at 19:42 UTC (3:42 p.m. EDT) on June 11, 2006, soon after Alberto had become a tropical storm. It maps rain intensity as viewed by the TRMM satellite. Rain rates in the center swath are from the TRMM Precipitation Radar, and rain rates in the outer swath are from the TRMM Microwave Imager. The rain rates are overlaid on infrared data from the TRMM Visible Infrared Scanner. TRMM confirms that Alberto was poorly organized. The center of circulation is well to the southwest of the heavier rain areas (darker red and green areas). In fact, there is essentially no rain in the immediate vicinity of the center. This highly asymmetric structure results from wind shear. At the time of this image, Alberto was a weak tropical storm with maximum sustained winds of 70 kilometers per hour (45 miles per hour).

After these images were taken, however, the wind shear pushing the storm off center decreased, allowing Alberto to become better organized. On June 12, Alberto had become a strong tropical storm with maximum sustained winds of 110 km/hr (70 mph) according to the NHC, just below hurricane strength. The system was continuing to track to the northeast towards the coast of Florida, where a hurricane watch was in effect.

TRMM was launched in November 1997. From its low-earth orbit, TRMM has been providing valuable images and information on tropical weather systems using a combination of passive microwave and active radar sensors, including the first precipitation radar in space. TRMM is a joint mission between NASA and the Japanese space agency, JAXA.