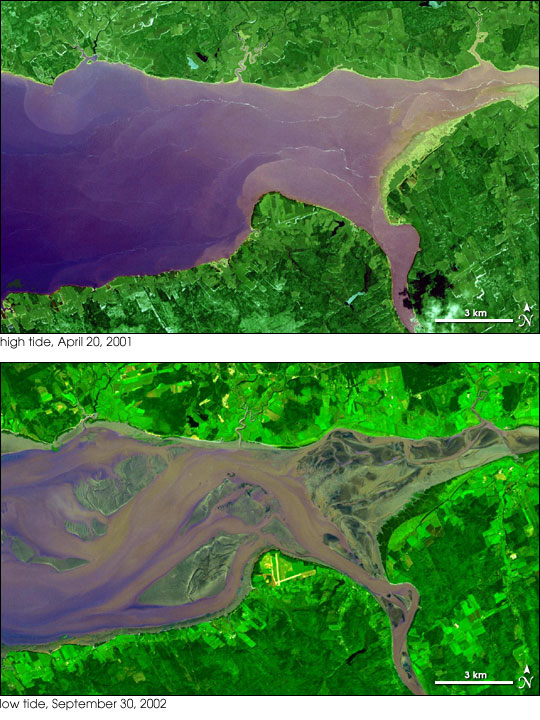 Tucked into a pocket between the Canadian provinces of New Brunswick and Nova Scotia, the Bay of Fundy is famous for having dramatic differences between its high and low tides. In fact, the tides observed here are tied with Ungava Bay (located farther north) for the largest tides on Earth. Under typical conditions, high tide at the head (the most inland part) of the Bay of Fundy is as much as 17 meters (about 56 feet) higher than low tide.

This pair of images from the Advanced Spaceborne Thermal Emission and Reflection Radiometer (ASTER) on NASA’s Terra satellite shows the dramatic difference in the amount of water-covered land at the head of the southeast corner of the bay during a high tide on April 20, 2001, and a low tide on September 30, 2002. Vegetation is green, and water ranges from dark blue (deeper water) to light purple (shallow water). The Bay of Fundy splits into two arms on its eastern (inland) end; the southern arm is called the Minas Basin. This image shows the head of Minas Basin, which is called the Cobequid Bay. During the low tide, much of the Cobequid Bay becomes exposed, and the landscape appears to turn from a bay into a wide channel of braided rivers.

The large tides in the Bay of Fundy result from tidal resonance. Tidal resonance occurs when the amount of time it takes a large wave to travel from the mouth of a bay to the far shore and back to the mouth is the same, or nearly the same, as the time between the high and low tides. This coincidence means that the general sloshing of the water around the bay can become synchronized with the lunar tides, amplifying their effect. When other factors come into play, such as storm surges, the tides in the Bay of Fundy have exceeded 20 meters.