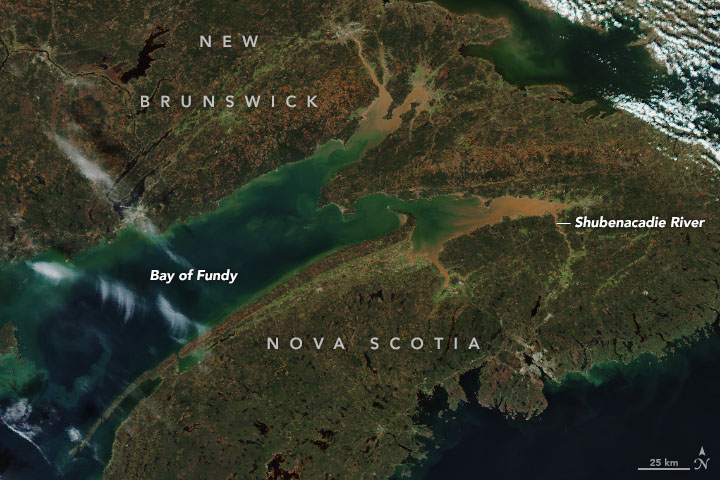 From above, rivers that flow into the Bay of Fundy look a bit different than most. Their waters are often chocolate-colored, swirling with eddies, and bordered by red dunes and sandbars.

On the afternoon of October 20, 2019, the Moderate Resolution Imaging Spectroradiometer (MODIS) on NASA’s Aqua satellite captured this image of sediment-rich water in the Bay of Fundy, the Shubenacadie River, and other nearby waterways in far eastern Canada. On land, fall weather had transformed the foliage of hardwoods and other deciduous trees and shrubs.

Sediment-rich waters are a common sight in the Bay of Fundy. With a tidal range up to 12 meters (38 feet), the funnel-shaped bay has the highest observed tides in the world. For comparison, most of the U.S. coast has a tidal range of 1 to 2 meters (3 to 6 feet).

The geometry of the bay causes tidal resonance, which plays a key role in elevating tides. The bay is just the right width and depth for water to slosh back and forth at a frequency—every 12 or 13 hours—that matches the natural frequency of high tides, which are driven by the gravitational pull of the Moon and Sun on Earth. In addition, the position and configuration of continents in the Northern Hemisphere contributes to the high tides. Since North America, Europe, and Asia are pressed closer together than the continents in the Southern Hemisphere, water gets “constricted” in the Northern Hemisphere in a way that slightly amplifies tides.

Since the Bay of Fundy becomes shallower and narrower, incoming tidal flows get forced especially high as water piles up behind mudflats at the mouth of the bay. Once water pushes past this obstacle, it rushes into the narrow valleys and collides with river water flowing in the opposite direction, producing waves and rapids that move opposite of the rivers’ natural flow.

The huge volumes of water rushing into Bay of Fundy’s feeder rivers can create quite a spectacle, with surges of water that rush upstream at roughly 15 kilometers (9 miles) per hour. They make a roaring sound reminiscent of an oncoming train. These tidal bores often have leading waves as high as 1 meter (3 feet), large enough for rafting and surfing.

As for the colors, rivers in Nova Scotia and New Brunswick flow through soft red Triassic-era sandstone that easily erodes. The sediment and the regular churning of incoming and outgoing tides and tidal bores keeps the bay and rivers perpetually muddy. 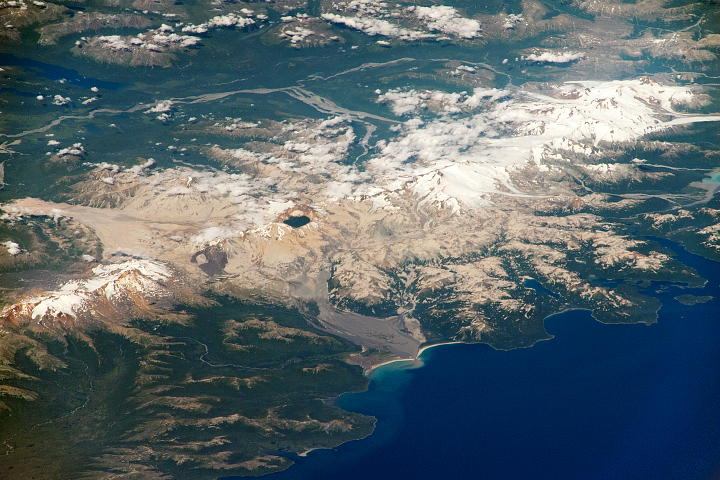 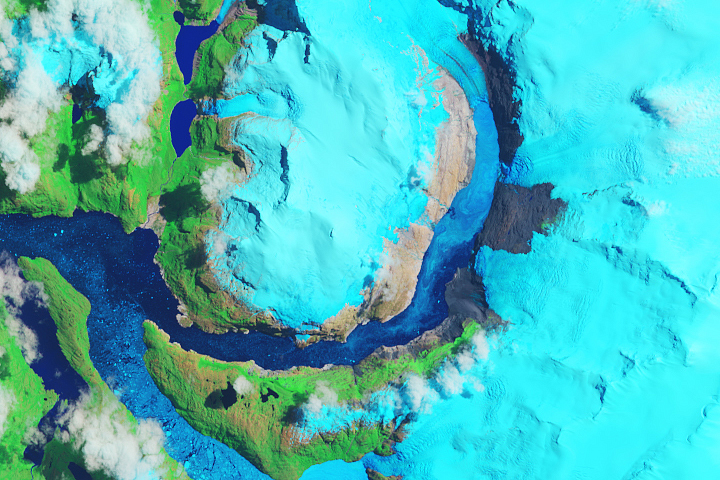