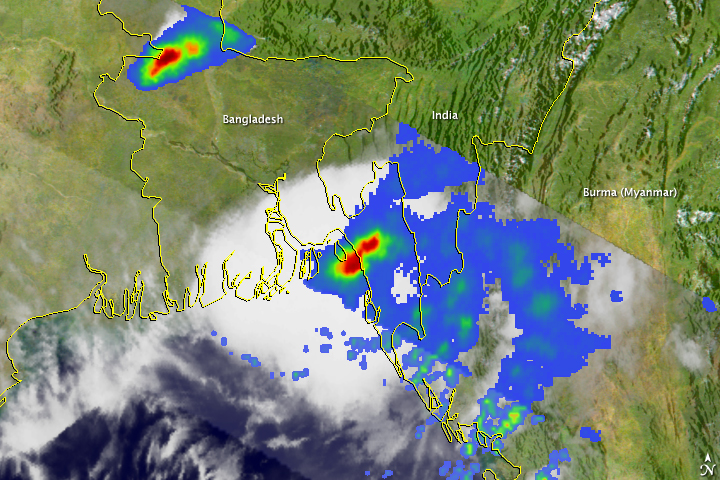 Tropical Cyclone Bijli came ashore over eastern Bangladesh on April 17, 2009. The storm caused little damage, according to news reports, but did dump heavy rain on Bangladesh and neighboring Burma (Myanmar). This image, made with data captured by the Tropical Rainfall Measuring Mission (TRMM) satellite on April 17, shows the rainfall associated with the storm.

As much as 50 millimeters of rain fell per hour in the regions where rainfall was heaviest, shown in red. Outside the area of concentrated heavy rain, the rainfall was relatively light, as shown by the wide field of blue. The measurements shown in this image are from a variety of sensors on the TRMM satellite. Rain rates in the center of the swath (lighter area) are from the TRMM Precipitation Radar, the first precipitation radar in space, and those in the outer part of the swath are from the TRMM Microwave Imager. The rain rates were overlaid on infrared data from the TRMM Visible Infrared Scanner.

Designed to measure rainfall from space, the Tropical Rainfall Measuring Mission satellite has been in service for over 11 years and continues to provide valuable images and information on tropical cyclones around the tropics using a combination of passive microwave and active radar sensors.

Tropical Storm Bijli formed in the Bay of Bengal in mid-April 2009, and the storm appeared to be headed for landfall in eastern Bangladesh on April 17.

Rain rates in a few cloud bands on the eastern side of Typhoon Dolphin approached 50 millimeters per hour (red) when the storm was observed by the Tropical Rainfall Measuring Mission satellite on December 14, 2008.

Cyclone Nargis passed over Burma (Myanmar) after having formed in the Bay of Bengal. At one point, Nargis was a Category 4 cyclone, with sustained winds of 210 kilometers per hour (130 miles per hour). The typhoon lost strength before coming ashore on May 2 as a Category 3/4 storm, but it still carried very powerful winds and heavy rain when it struck the low-lying coastal plains, causing severe damage. News reports cited a death toll of 10,000 people, with thousands more missing, as of May 5.