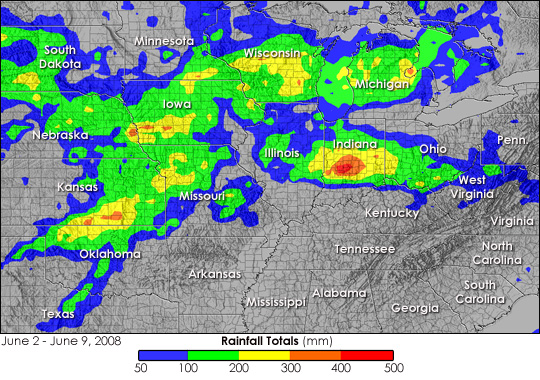 Severe storms brought heavy rain to the mid-section of the United States when a developing area of low pressure over the Central Plains combined with high pressure anchored off the Southeast coast of the United States to channel moisture up from the Gulf of Mexico. In addition to high winds, hail, and tornadoes, the strong storms brought heavy rain to the region. The hardest hit area was central Indiana where nearly 11 inches of rain was reported from Friday evening (June 6, 2008) into Saturday morning. The rain resulted in widespread flooding. As of June 9, ten people had died in the floods and stormy weather, reported the Associated Press.

This image shows rainfall totals for the 7-day period between June 2 and June 9, 2008. Rainfall amounts exceeding 100 millimeters (approximately 4 inches, shown in green) extend from north-central Oklahoma up into South Dakota and eastward into Michigan and Ohio. Higher amounts on the order of 200 to 300 mm (about 8 to 12 inches, shown in yellow) cover significant portions of this same area. The highest totals for the period (shown in red) exceed 400 mm (16 inches) and are located over central Indiana.

The image was made from data generated by the near-real-time Multi-satellite Precipitation Analysis (MPA) at NASA’s Goddard Space Flight Center, which monitors rainfall over the global tropics. In the analysis, rainfall data from a number of satellites are calibrated using data collected by the Tropical Rainfall Measuring Mission satellite (TRMM). TRMM was placed into service in November of 1997 to measure rainfall over the global tropics using a combination of passive microwave and active radar sensors.

Severe storms brought heavy rain, high winds, hail, and tornadoes to the mid-section of the United States in early June 2008.