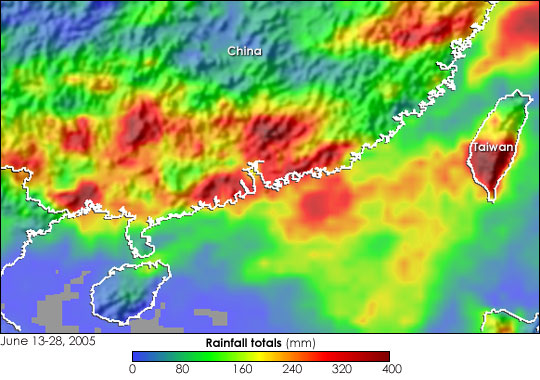 Seasonal rains during June 2005 have resulted in widespread flooding across southern and eastern China. The floods and associated mudslides have left hundreds dead and forced thousands from their homes, with the most severe damage in Guangxi and Guangdong in southern China. The rains are a normal part of life in southern China, where May and June are Meiyu season. Meiyu literally means “plum rain,” which refers to the widespread rains that can occur at the time when plums ripen.

This image shows rainfall totals over southeastern China between June 13 and June 28, 2005. A broad band of red, representing the highest totals, stretches across southern China, including the provinces of Guangxi and Guangdong, and the northern part of the South China Sea and into Taiwan. This area received between 80 (green areas) and 400 (dark red areas) millimeters (about 4-16 inches) of rain during this two-week period.

The data used to create this image are from NASA’s Tropical Rainfall Measuring Mission (TRMM) satellite. TRMM was launched in November 1997 to provide better estimates of rainfall over the global Tropics. The satellite can cover vast areas of the Tropics where rainfall is poorly measured, such as over oceans and land areas where radar coverage is poor or lacking. Since that time, TRMM has been providing unprecedented estimates of rainfall over the Tropics using its array of passive and active sensors. This image was produced by the TRMM-based, near-real time Multi-satellite Precipitation Analysis (MPA) at NASA Goddard Space Flight Center, which provides rainfall estimates over the global Tropics.