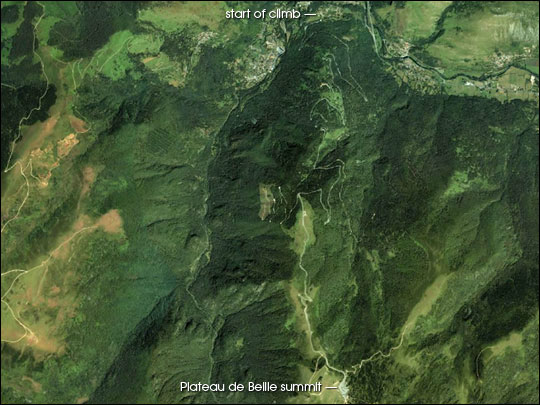 The annual Tour de France (bicycle race) is well known for its grueling mountain climbs. Stage 13 of this year’s race provided an example of how difficult the terrain can be. On Saturday, July 17, the riders of the Tour de France raced 205.5 km from Lannemezan to the mountaintop ski station Plateau de Beille. Along the way the road ascended six different climbs (and descended five), for a total of 4,160 meters of elevation gain. The final climb of the day was the fearsome Plateau de Beille—15.9 km of climbing at an average gradient of 7.8 percent (and a maximum gradient of 9.5 percent) for an ascent of 1,240 meters. To put this in perspective, there are no paved roads this steep and long in the United States.

The stage was won by American Lance Armstrong, closely followed by Ivan Basso, a young Italian rider. Armstrong was supported up the climb by his teammates (cycling is a team sport, with nine riders per team who help set the pace and shelter the team leader from the wind) who were able to leave behind almost the entire field before tiring themselves out. Overall, on July 19, Armstrong was second and Basso third behind Thomas Voeckler, the current French national champion. Voeckler was able to hold onto the race lead—and the fabled Maillot Jaune (yellow jersey) worn by the race leader—by 22 seconds, finishing 13th, 4 minutes and 42 seconds back. Other contenders lost minutes to Armstrong and Basso, and a handful dropped out (including American Tyler Hamilton). The final rider crossed the finish line 47 minutes and 55 seconds after Armstrong.

Plateau de Beille is located in the Pyrenees, a mountain range along the border between France and Spain (and the tiny nation of Andorra). Aneto is the highest mountain, with an elevation of 3,404 meters.

This true-color, high-resolution image was acquired by DigitalGlobe’s IKONOS satellite in June of 2001. Images and animation copyright Space Imaging, Inc.