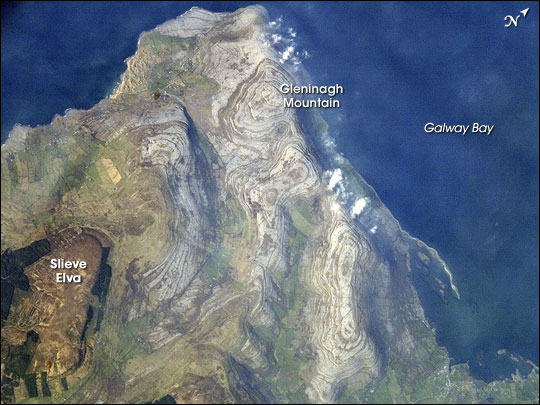 The mountain (image center) appears light gray, with brown concentric banding. Slieve Elva (lower left) is capped with younger dark brown shale, and it has a border of dark green vegetation; at 345 meters above sea level (1,132 feet), it is the highest point on the plateau. The rounded character of limestone hills and intervening valleys of Gleninagh Mountain comes not only from the erosion of the limestone by water, but also from the scouring of loose material by past glaciers.

Most karst occurs in limestones or dolostones, rocks made primarily from the minerals calcite or dolomite. Groundwater and surface water moves through fractures in the rock, dissolving it over time, forming voids and channels. As the voids grow and connect, the rock dissolves even more; when the rock below can no longer support the overlying rock and soil, collapse features like sinkholes form. Over time, the collapses can turn an originally flat landscape into one with significant topography.

A very thin cloud cover is visible over Gleninagh Mountain. Despite the barren appearance of this portion of the Burren Plateau, thin soils are present and the area is used for grazing cattle during the winter. Numerous small springs —another hallmark of karst terrain: surface streams tend to disappear underground via fractures—provide water for both cattle and human use in this otherwise dry landscape.

Astronaut photograph ISS016-E-30080 was acquired on February 17, 2008, with a Kodak 760C digital camera fitted with an 800 mm lens, and is provided by the ISS Crew Earth Observations experiment. The image was taken by the Expedition 16 crew, and is provided by the Image Science & Analysis Laboratory, Johnson Space Center. The image in this article has been cropped and enhanced to improve contrast. Lens artifacts have been removed. The International Space Station Program supports the laboratory to help astronauts take pictures of Earth that will be of the greatest value to scientists and the public, and to make those images freely available on the Internet. Additional images taken by astronauts and cosmonauts can be viewed at the NASA/JSC Gateway to Astronaut Photography of Earth. Caption by William L. Stefanov, NASA-JSC.