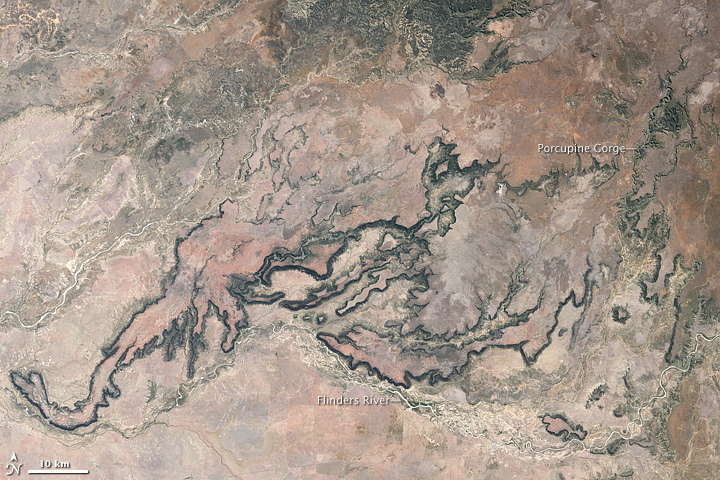 Hard, basalt rock caps a large sandstone plateau in the savanna of central Queensland. The erosion-resistant rock (a type of hardened lava) weathers the elements with persistence. In places, however, water has gained the upper hand, carving the plateau and exposing the pale sandstone that underlies the basalt. Seasonally dry streams have carved canyons and cliffs into the southwestern part of the plateau.

This natural-color image of the area was captured by the Enhanced Thematic Mapper sensor on NASA’s Landsat satellite on July 9, 2001. Several wide, flat-bottom canyons extend southwest from the plateau; the creeks that carved them feed into the Flinders River (bottom). The area has a dry climate, and creeks are often little more than isolated pools during the dry season. On the plateau, vegetation is mostly drought-tolerant grasses and widely scattered shrubs. The cliffs that edge the plateau concentrate runoff, and they are lined with denser vegetation (shrubs or small trees) that creates a dark green outline. One of the most spectacular canyons in the area is Porcupine Gorge, which is one of several small national parks in the area.

Part of the Sahara Desert, the rocky plateau is rich in geologic and human history.