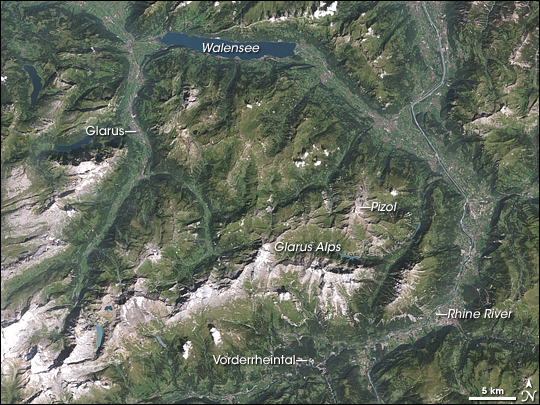 Geologists have long known that rocks layers are usually deposited onto the land surface in a certain order, with older layers of rock on the bottom and newer layers of rock on the top. Every so often, however, geologic investigations turn up situations where this principle of superposition is reversed, and one such example occurs in the Swiss Alps. A rock formation known as the Glarus Overthrust reveals ancient rocks overlying much younger rocks.

The Enhanced Thematic Mapper Plus on NASA’s Landsat 7 satellite captured this image of the Glarus Overthrust and its surroundings on August 28, 2001. In this summertime shot, river valleys lined with lush green vegetation alternate with white mountain peaks still sporting some snow. The Glarus Overthrust appears in different parts of this image, most conspicuous in the Glarus Alps, and in the north-south-running, gray-brown outcrop in the west. Geologists have determined that this rock formation forms a giant arch. In the south, near Vorderrheintal, the outcrop reaches an elevation of 600 meters (1,970 feet) above sea level. North of that, the formation rises to an elevation of 3,000 meters (9,845 feet) above sea level before sinking down to sea level under Walensee. Farther north, the rock formation rises above the surface again, where it is known as the Säntis Overthrust.

How did the older rocks end up on top of newer ones? Geologists suspect the underground workings of plate tectonics. After these rock layers formed, they were eventually buried by newer rock layers until they lay well underground. Later on, as one tectonic plate pushed into another, the movement displaced the rock layers. The events likely occurred at a depth of 16 kilometers (10 miles) underground, at temperatures up to 320 degrees Celsius (about 600 degrees Fahrenheit). Several universities continue to conduct research in this area, however, and future discoveries about tectonics and mountain building processes are likely.